Lotus Whomalt 「ロータス・フーモルト Rōtasu Fūmoruto」[2] is an Adjutant General from the Diamond Kingdom.[3] He is widely known by his nickname, the Hell Lotus.[1]

Lotus is a hairy man with medium-length black hair. He also sports a mustache and a goatee, which only covers his chin. One of his notable features is a huge scar, in a shape of a straight line, that crosses his upper left chest to his lower right chest. Additionally, he wears a headpiece on his forehead, which has three diamond-shaped ornaments, positioned to the right side of his forehead.

Lotus's attire consists of a tunic and a trousers. His light-colored tunic is loose and has a large v-shaped collar that showcases his chest. On top of his tunic, Lotus wears a three-way black belt, which is supported by his right shoulder. His trousers are light-colored and two black fabrics protrude from the waist to his tights with diamond-shaped ornaments at the end. Furthermore, Lotus also wears a pair of black boots with furry collars.

Lastly, Lotus wears a coat over his attire. The coat is divided into two colors where it has light-colored fabric for his torso and sleeves while the cuffs and the rest of the coat are dark-colored. Both black lapels have three diamond-shaped ornaments on them.

Lotus is an easy-going and laid-back person who always tries to avoid fighting at all cost.[4] It is not because he does not desire conflict, it is just because he is too lazy to fight as he always complains about draining his magical power every time he fights someone.[5][6] His laid-back personality is also shown from his expression and lack of tension from his actions.[7][8]

In contrast, Lotus is still a mage of high reputation as he could be serious according to the circumstances and uses his full potential.[5][9][10]

In addition, Lotus can be considered either a highly experienced strategist or just a coward. This side of him is noted by his tendency of escaping when he realizes his low probability of winning.[11][12][13]

During several conflicts, which happen between the Diamond Kingdom and the Clover Kingdom, Lotus encounters Julius Novachrono and Yami Sukehiro. During his fight with the latter, Lotus decides to escape after realizing that his chance of winning against him is slim. Unfortunately, he does not manage to escape before Yami inflicts a scarring wound on his chest.[1][17]

Years later, after the emergence of a dungeon at the border between the two Kingdoms, Lotus is assigned to conquer it. He then travels to the dungeon along with several subordinates, one of whom is the Kingdom's secret weapon, Mars. Not long after they arrive at the dungeon and Mars quickly leaves by himself, Lotus encounters Luck Voltia, a mage from the Clover Kingdom. The boy manages to take down all of Lotus's subordinates with relative ease as Lotus remains on the sideline and observes the fight.[18]

This leads him to negotiate the possibility of avoiding a fight with Luck. Lotus then tries to escape but Luck is able to keep him at bay by constantly attacking him.[19] During the fight, Lotus is on the defensive as he evades all of Luck's attacks without giving any significant counterattacks.[20]

After he recognizes that Luck belongs to the Black Bull squad, Lotus reveals that he has activated a weakening magic spell since Luck's arrival.[21] As Luck falls to the ground, Lotus tries to leave the Black Bull's Knight to slowly die by himself but the boy gets up and continues the assault.[22] When Lotus realizes that Luck has released even greater magical power, Lotus decides to end the fight by binding him within Smoke Binding Cross Prison.[23]

When Lotus tries to take out Luck for good, Asta interferes by destroying Luck's binding.[24] Seeing that he is about to fight against three mages, Lotus traps all of them in a veil of smokes, within which he also hides himself.[25] Using his mana sensory ability, Lotus observes the Black Bulls while they try to escape. Suddenly, a barrage of lightning spell attacks head towards him. Lotus manages to easily avoid all of them as he concludes that his opponents are in desperate state. However, Lotus is led into Asta's sword swing.[26]

As he is heavily injured by Asta's attack, Lotus gives his remarks to the Clover Kingdom for having a mage that does not possess any magical power. Afterwards, the Diamond Kingdom's mage escapes along with his fallen subordinates as he is aware of his physical condition. As they increase their distance from the Black Bull's mages, Lotus puts his hope for the mission's completion on Mars.[27]

Unfortunately, Mars' attempts to defeat the Clover Kingdom's mages and conquer the dungeon also result in failure as Lotus observes the fight while keeping himself hidden. When the dungeon starts collapsing, Lotus manages to escape by following the trails of the Clover Kingdom's mages. He is also able to secure a hefty amount of treasure from the dungeon's treasury and saves the unconscious Mars.[28] On the way back to the Diamond Kingdom, Lotus is surprised when the unspoken Mars offers him gratitude for saving his life.[29]

Lotus is part of an army led by three of the Eight Shining Generals to attack Kiten.[30] During the ensuing battle, Lotus notices the roots William Vangeance has spread across the town and tries to warn the generals of the magic, but they ignore him. William then creates Great Tree Mistilteinn and Lotus is shocked by the amount of mana.[31] While William is distracted dealing with Broccos, Lotus sneaks up the tree and ambushes the captain, but Yami appears and manages to slash Lotus's shoulder. Lotus recognizes Yami and decides to call a retreat. He flies off with Broccos and several Diamond mages in a smoke cart.[32]

Upon return to the Diamond Kingdom, Lotus informs Moris Libardirt and the new generation of Eight Shining Generals about the failed invasion.[33]

Months later, Mars forces Moris out of the country. Lotus accompanies Moris to the Spade Kingdom, where they work for the Dark Triad.

As the Tree of Qliphoth ritual is underway, Lotus is deeply disturbed by the preparations.[34] After witnessing Moris's plan for the world, Lotus decides to take a stand rather than run away and attempts to stop Moris. In the fight, Lotus loses the lower part of his right arm. Moris then stitches multiple devils together into one and uses it to attack Lotus. However, The Raging Black Bull crashes through the castle wall and punches the devil, smashing it to pieces.[35] 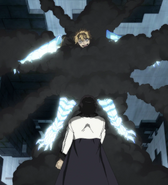 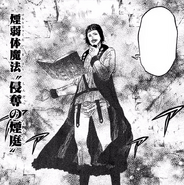 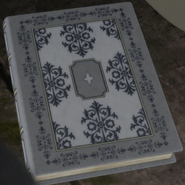 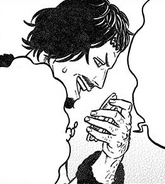