Lolopechka 「ロロペチカ Roropechika」[2] is the princess and ruler of the Heart Kingdom[3] and the priestess of Undine, the spirit of water.[4] The Princess has been cursed by the devil Megicula.[5]

Lolopechka is a young woman with long, black hair. She has a small beauty mark under the right corner of her mouth. On her abdomen is a black spiral that is a result of Megicula's curse.[6]

For her casual attire, Lolopechka wears a long-sleeved, white shirt with a magenta section on the front and typically goes barefoot. She also wears a long, pink skirt and a pair of rimless glasses that have dark red arms and bridge.

For her formal attire, Lolopechka wears a full-length, layered, white gown with long sleeves and a blue belt cinched under her bust. Over this, she wears a red robe draped over her shoulders with gold ruffles and fringe trimming. Her hair is pulled back and hidden under a white veil. 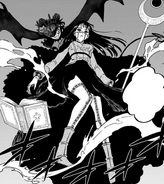 Lolopechka initial introduction showed her to be clumsy, easily distracted, and somewhat absent minded. However, as the Princess to her kingdom, Lolopechka takes her responsibilities very seriously and cares greatly for her subjects as seen in her devotion to constantly protect and nurture her kingdom's lands for the sake of her people's prosperity using her immense power to singlehandedly protect the entirety of the Heart Kingdom and assist in its development by using her water magic on its forests and crops.

Lolopechka fights Vanica Zogratis, one of the Spade Kingdom's Dark Triad, and Megicula, Vanica's devil, who have infiltrated the Heart Kingdom. The Princess and Gadjah are unable to defeat Vanica, and Megicula curses Lolopechka before leaving.[7]

When a group of the Clover Kingdom's Magic Knights request entry to the Heart Kingdom, Lolopechka and Undine decide to test the Knights' abilities.[8] They sense Asta and his devil among the Knights.[9] While the boat is traveling, Lolopechka kidnaps Asta[10] and brings him to an underground chamber so that Undine can test him.[11]

During the fight, Lolopechka falls asleep on her pet beaver behind the throne. Asta barges into her room and startles her, causing her to accidentally headbutt him. Undine pulls Asta away from her and comforts the Princess.[12] Lolopechka explains that they were testing the Magic Knights, and when Asta asks about the curse they were following, the Princess reveals that she is the cursed one. Suddenly Lolopechka breaks off the conversation and rushes off to take care of various things around the kingdom using her Mana Zone. Undine dresses Lolopechka in her formal attire, and the Princess finds the clothes cumbersome and trips over them.[13]

Once Gadjah has brought the other Knights to her palace, Lolopechka asks for their help but then trips and stumbles, dropping her regal demeanor. She explains the situation with the devils and asks Asta and Secre Swallowtail for the help of their magic. Noelle Silva and Asta contact Yami Sukehiro for permission, but he is too busy in the bathroom, which Lolopechka finds amusing. Mimosa Vermillion instead contacts Marx Francois and Julius Novachrono.[14] The Princess and the Magic Emperor discuss the arrangement and agree to an alliance. She admits that they are all too weak to defeat Megicula, so she decides to have her Spirit Guardians train the Magic Knights for six months.[15]

Lolopechka trains Noelle, Mimosa, and Secre with a focus on the plans and tactics she developed after facing Vanica and Megicula.[16][17]

Six months later, Lolopechka spots one of the Spade Kingdom's mobile fortresses moving through a Grand Magic Zone and using the weaker citizens to power it. When she tells Asta about it, he immediately flies off,[18] so Lolopechka sends Noelle, Mimosa, and Finral Roulacase to help Asta and dispatches Luck Voltia and Leopold Vermillion to free the occupied town, Tolon.[19] Noelle carries a copy of Undine to Tolon, and Lolopechka uses it to erect a barrier around the town.

When the Magic Knights return to the Heart Kingdom, Lolopechka compliments their efforts and dismisses them for the day. Luck, Leopold, and Asta want to spar with Gadjah, which Lolopechka finds exciting and wants to join, but Undine convinces the Princess to take a bath instead.[20] She joins Noelle and Mimosa in Elmora Lake. Lolopechka admits that she is happy to have met good people from the Clover Kingdom and to have made friends with whom she can be herself.[21]

Later in her underground chamber, Lolopechka dotes on Charmy Pappitson, feeding her fruits. Her laughter is interrupted when she senses people infiltrate her barrier. She creates a map showing the intruders' locations and realizes that one of them is Vanica.[22] While using her Mana Zone to evacuate and protect her citizens, Lolopechka notices that four of the Spirit Guardians have been defeated. She panics and decides to withdraw those she sent to support the Spirit Guardians, but Noelle convinces her to let them handle the fighting.[23]

When Vanica and a Dark Disciple reach the underground chamber, Lolopechka has Undine boost Mimosa's Magic Cannon Flower to defeat the Disciple with one shot. Vanica enters after her Disciple, and Lolopechka questions why Vanica attacked the citizens when the Princess is the Dark Triad's goal. Vanica explains that she wishes to further motivate the Princess, which distresses Lolopechka. After Noelle points out that they have defeated all of Vanica's Disciples, they are shocked to see the Disciple stand back up, and Vanica explains and demonstrates that her Disciples will continue to resurrect due to a curse. Lolopechka then worries about all the others as the Disciples stand back up uninjured. When Vanica reveals that defeating her will end the resurrections, the three royal women prepare to battle, with Lolopechka changing into her formal dress.[24]

Lolopechka defends against Vanica's attacks, while Noelle attacks Vanica and Mimosa fights the Dark Disciple. During the fight, Vanica reveals that Dante and Zenon Zogratis are hunting the Dark Magic and World Tree Magic users, so Lolopechka researches those in the memories of past princesses. She finds a horrifying memory about the Tree of Qliphoth and decides that she cannot let the Dark Triad run free to fulfill that mission. She traps Vanica in a massive body of water that weakens Vanica's Blood Magic and boosts Noelle's Water Magic.[25] As Vanica begins drawing on greater amounts of Megicula's power, Lolopechka helps Noelle retreat and avoid Vanica's attacks.[26] Once Vanica is at her utmost limit, Secre flies in and seals Vanica in an Eternal Prison combined with Mana Method.[27] Lolopechka then checks the curse mark on her abdomen to see if Vanica has been successfully cut off from the world. To her shock, the mark is still there due to Megicula's Decaying World spell weakening the arrays on the prison.

Megicula then takes partial control of Vanica's body, breaks out of the prison, binds Secre, and destroys the Ludic Sanctuary, injuring Lolopechka, Noelle Silva, and Secre, and cursing Undine. Lolopechka screams out in anguish over Undine and in pain from her curse. Brokenhearted and exhausted, Lolopechka falls unconscious next to Undine. Vanica decides to kill Lolopechka since the Princess is unable to continue fighting; however, Noelle refuses to allow that and attacks Vanica.[28] When Vanica is somehow injured by one of Noelle's attack, she is reminded of her fight with Acier Silva, Noelle's mother. Vanica decides to take Lolopechka as a hostage in order to motivate Noelle to become stronger. As she flies away with Lolopechka to the Spade Kingdom, Vanica detonates the devil power in her Disciples, causing multiple massive explosions across the country.[29]

When Vanica returns to the Spade Kingdom with Lolopechka, Moris Libardirt uses his devil-boosted magic to extract the Princess's inherited knowledge and transplant it into himself.[30] Afterward, Vanica makes Lolopechka into a puppet and boosts her power further with curse-markings.

During her fight with Charlotte Roselei and Rill Boismortier, Vanica uses Lolopechka to fight the captains, easily destroying their defenses. However, Gadjah and Noelle interrupt the fight, and Gadjah grabs Lolopechka.[31] Vanica forces Lolopechka to attack Gadjah, causing the Princess to cry.[32]

After Noelle defeats Vanica, Megicula partially manifests out of Vanica's body and reveals that it can fully manifest itself once Lolopechka and Vanica die. The devil then alters Lolopechka's curse, turning her into a devil, and Lolopechka slashes Gadjah's shoulder and side.[33] Lolopechka follows up with Hydra of Darkneros, but Gadjah fights past the heads. However, he hesitates in striking her, and she plunges her hand through his abdomen.[34] Gadjah temporarily paralyzes Lolopechka before attempting to destroy Megicula.[35] Megicula survives and decides to detonate Lolopechka's devil power, but Asta arrives and nullifies the building magic power. Lolopechka then falls unconscious into Asta's arms.[36] Although the Demon-Destroyer Sword dispels the Exploding Life curse, the other curses afflicting her remain active. Megicula then tries to sacrifice both Lolopechka and Vanica, but Charlotte's blue roses stop that curse.[37]

When some reanimated Dark Disciples threaten Lolopechka, Asta is unable to defend her, so Undine pulls the Princess and Asta away from the battlefield.[38] 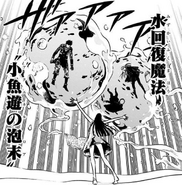 After Megicula alters Lolopechka's curse, Lolopechka is transformed into a devil, greatly increasing her magic power and offensive potential.[51] Her physical strength and speed are similarly enhanced, allowing her clawed hands to quickly slice and pierce opponents.[52][53] 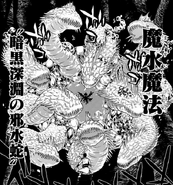 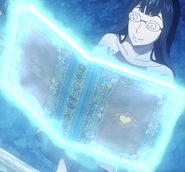 Lolopechka loves the Heart Kingdom and its citizens and will drop important conversations to take care them. She even takes time to learn their names and keep up with their lives.[55] However, she struggles with maintaining proper princess behavior around them.[56]

During the Spade Kingdom's invasion, Lolopechka focuses on protecting her people and getting them to safety.[57]

As the next princess, Lolopechka inherited the kingdom's contract with Undine, who has raised and cared for Lolopechka ever since her infancy. As such, they are incredibly close.[58] Undine is also incredibly protective of Lolopechka and frequently has to take care of the Princess due to her clumsiness.[59][60] After seeing Undine cursed, Lolopechka breaks down emotionally.[61]

Over the course of their training, Lolopechka befriends Noelle Silva and Mimosa Vermillion and trusts them enough to open up about her feelings and insecurities,[62] as well as to drop her façade as princess around them. She also enjoys spending her free time with them.[63]

Lolopechka adores Charmy Pappitson and enjoys spoiling her with food.[64]