Lily is a young woman with dark blue hair. Her bangs parted to the sides, with more on the right side of her forehead and covering most of her right brow. She has large, kind teal eyes, lined with long lashes. She has relatively pale skin and a black beauty mark under her left eye.

Lily wears a nun's habit and a gold cross on a gold bead necklace.

Lily is shown to be stern and kind. Often shown as a motherly character, as she often takes care of the younger children, cooks, and scolds when the children are misbehaving particularly Asta when he demands she marry him.

One day, when they are young, Yuno returns to the church with a heavily injured Asta, and Lily heals the boy's injuries. Lily notices a change in the boys after that day: Asta always runs off by himself and returns dirty and Yuno no longer cries.[3]

Lily goes to Theresa Rapual's church in Nairn for training and, some time later, tells her about Asta.[4]

Asta proposes to Lily, but she quickly refuses. He insists even after she forcefully silences him with a spell. He finally stops when Yuno interrupts him.[5] Yuno then helps Lily with the laundry, spin-drying it with his Wind Magic.[6] When Asta is disheartened by his own lack of magic, Lily approaches him and suggests that attaining a grimoire might trigger his abilities. The boy then runs off, and Yuno tells her not to worry.[7]

The following March, many of the villagers gather to watch the Grimoire Acceptance Ceremony.[8] Lily and the others from the orphanage are shocked when Asta does not receive one but Yuno receives a four-leaf clover. Lily grows concerned for Asta after Yuno refuses to acknowledge him as a rival.[9]

Six months later, Orsi Orfai and Lily visit Drouot and ask about Asta's grimoire, but the old man admits to being clueless about it.[10]

Several months later, the villagers of Hage are left confused after the kingdom is saved from the Arrows of Judgment and the demon skeleton shines with light. They watch as a dungeon rises over the skeleton and passes overhead. A possessed Purple Orca then attacks the villagers.[11] Lily fights back but her magic is too weak. When the elf attacks her, Nash jumps in front of her. The pair are saved by Yuno and Asta.[12][13]

After the elf is defeated, Lily and the children rush to thank Yuno and Asta.[14] Asta inquires if Lily was hurt and then professes his love. The village thanks the two boys and bids them farewell as they leave to fight more elves.[15]

A few days later, Lily reads the newspaper article about Asta's trial and is in disbelief that he is a treasonist and a devil user.[16] 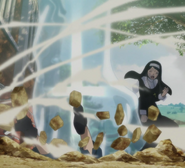 Being one of the people who raised and looked after Asta, she cares deeply for him and his wellbeing and is usually supportive, yet stern of the young boy. Asta has repeatedly proposed to marry her, often several times at once, which she has flat denied just as many times despite his insistence prompting her to use Magic at times to draw a line.

Looking after Yuno, she cares deeply for him and often gives him chores, and trusts him to get the job done and correctly.

Retrieved from "https://blackclover.fandom.com/wiki/Lily_Aquaria?oldid=60359"
Community content is available under CC-BY-SA unless otherwise noted.