View source
watch 03:36
Wiki Targeted (Entertainment)
Do you like this video?
Play Sound

Liebe 「リーベ Rībe」[1] is a low-ranking devil from the first level of the underworld[2] and resides within Licht's former grimoire, which is currently owned by Asta.[3] He is the source behind Asta's Anti Magic.[4]

Liebe has messy, white hair and a short stature. Most of his body is coated in black; a black line extends up his chest to under his chin, while two lines cross over his red eyes. He has two bat-like wings, two ram-like horns, a long thin tail with trident like tip, pointed teeth, and clawed fingers and toes.

While inside the grimoire, Liebe appears as a tall, black figure with wavy hair.[4]

During the Devil-Binding Ritual, his right arm resembles the one he took from Asta.[6] After Asta forges an equal contract with Liebe, a white marking appears around Liebe's left wrist. The marking is two thin, spiked lines with demonic lettering between the lines.[7] Due to the contract, Liebe takes on a diminutive form whenever Asta uses his power.[8]

Liebe as a child

Liebe in the grimoire 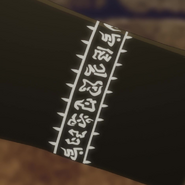 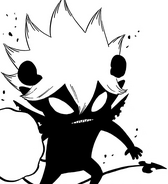 Liebe as a devil familiar

Liebe harbors a deep hatred for other devils due to the cruel torment he suffered every day of his life in the underworld,[2] even more so after the murder of his foster mother by Lucifero.[9] Liebe mockingly refers to another devil, Zagred, as his senior, while also ridiculing his brethren's loss with a sneer.[10]

Liebe desires a physical body connected to the five-leaf clover grimoire.[4] His presence is also intimidating, as individuals, including Asta himself, shudder whenever they sense Liebe.

Because of his past and upbringings, Liebe declares all devils are scum with himself being no exception. Despite this claim, Asta points out how Liebe is different from other devils. Asta inferred Liebe's inability to kill him as compassion; a fact proven as Liebe is shown to feel hatred and sadness for others- a characteristic most likely born from the love Liebe received from Richita.

Liebe finds his way to the Clover Kingdom but the humans are scared of him and call the Magic Knights to drive him off. Exhausted and injured, he collapses in the woods and is found by Richita, who brings him back to her house. Considering it fate that she found a devil after finding a five-leaf clover grimoire, Richita adopts him as her own son and names him Liebe. The pair live a carefree and fun-filled life together, until Lucifero discovers that there is a devil in the living world and attempts to take over Liebe's body. When Richita interferes, Lucifero takes control of Liebe's left arm and plunges it through Richita's chest; however, she manages to force Lucifero out of Liebe's body. As she dies, she puts Liebe into the five-leaf clover grimoire so he can grow up safe from Lucifero.[12] While inside the grimoire, Liebe curses the devils and declares his intent to kill them all. At some point, he manifests his own power, Anti Magic.[13]

Some time later, the grimoire appears to Asta, who uses the devil's Anti Magic to defeat Revchi Salik.[14]

When the Witch Queen removes Asta's limits on Anti Magic, Liebe tries to take over Asta's body. He tries to convince the boy to give up and let him control Asta's body, but Asta refuses and instead draws on the devil's power to create his black form.[4]

Months later, Liebe mocks Zagred after he is murdered by Asta.[10]

After Dante Zogratis beats down the berserking Asta, Liebe is outraged and wants to kill Lucifero.[15] When Asta and Yami Sukehiro's combined efforts fail to stop Dante, Asta asks for Liebe's help. Liebe agrees in exchange for Asta's right arm[16] and warns Asta that his body will only handle 50 seconds' worth of the devil's power.[17] During the fight, Asta's swords are all taken away so Yami passes his katana to Asta. The devil's arm imbues it with Anti Magic, and Asta successfully slashes Dante.[18] When Zenon Zogratis arrives shortly after and captures Yami, Asta asks Liebe for power, but the devil refuses since Asta's body is too weak.[19]

The next day, Nacht Faust, another devil host, takes Asta to a secret chamber so that Asta can make a contract with Liebe. As part of the ritual, Nacht summons the devil from Asta, which causes Asta's right arm to disappear. Liebe is surprised that Asta would willingly release it. Nacht then tells Asta that he must fight the devil and win.[20] Instead, Asta thanks Liebe for his help. Liebe mocks Asta and summons the Demon-Slayer Sword. While Asta watches in shock, the sword smashes the ground next to him and then slaps him away. Liebe threatens to take all of Asta's body.[21] Next, Liebe swings the sword and destroys one of the pillars of skulls. Nacht warns Asta that the devil will kill him, but Asta senses the devil's ki and notes that he is not filled with killing intent. Liebe agrees with Nacht that all devils do not have good hearts, but Asta rejects that notion, which reminds Liebe of Richita.[22] Angered by being reminded of her sacrifice, he loudly proclaims that all devils are scum, and promises to slaughter all of them, even if he has to steal Asta's body in order to do so.[23]

Asta promises to accept Liebe's feelings if he wins, which angers Liebe. The devil lashes out, but Asta dodges and punches him, so Liebe summons the other swords from the grimoire. Asta manages to catch Yami's katana and uses it to fend off the other swords. Asta then uses the techniques he learned from fighting against and alongside other swordsman, and easily overwhelms Liebe. With a thrust, Asta strikes Liebe's forehead,[24] causing him to fall backward onto the floor. Asta stands over him and declares victory. A collar appears around Liebe's neck, and four chains then pull him onto his knees and stake him to the floor. When Nacht informs Asta that he can make any contract he desires, Asta asks Liebe to be his friend, which confuses the devil. Asta explains that despite what they have been through together, he does not know the devil and wishes to learn about Liebe as equals. Asta offers his hand to Liebe and asks the devil his name. After reflecting on the similarities between Asta and Richita, Liebe introduces himself and shakes Asta's hand. Matching markings appear on their left wrists, and Asta's right arm returns. With the ritual complete, Nacht steps into the circle, Unites with Gimodelo, and challenges the pair to a fight.[25]

Nacht tells them that the only way for Asta to get stronger is to draw out all of Liebe's power. Using his magic, Nacht surrounds them both in shadows, so Asta enters his black form to get out of the spell. Due to the contract, Liebe is miniaturized whenever Asta draws on the devil's power; however, Nacht points out that their current condition is not Unite. Asta asks Liebe how can he use the latter's real power. Unfortunately, Liebe does not know how as he has never come out to fight before. They start arguing with each other until Nacht interrupts. He tells them that they will have to figure it out as they go along. He attacks them with several clones.[26]

After two days, Liebe and Asta continue to fail, and Asta notes that the injuries he receives in his black form are shared with Liebe now. The two eat cookies filled with Healing Magic from the Spade Kingdom's Resistance. Once their wounds are healed, Asta suggests a lame idea that Liebe goes along with on the chance of it being successful. When it too fails, Liebe and Asta begin bickering, but Nacht interrupts and informs them that their time is up. He then engulfs the two with his Dark Prison Hunting Ground spell. As Nacht attacks them, Asta enters his black form and notices that he cannot dodge the attacks since he cannot sense their ki. As Nacht continues his attacks, Liebe and Asta wonder why they cannot unite and think about why they want to get stronger. They both resolve not to let the other die. In that moment of shared desperation and determination, Liebe and Asta manage to unite, shining within the darkness of Nacht's spell.[27] Asta manages to release a single slash that cuts through Nacht's spell. Liebe and Asta then split apart and collapse to the floor. Nacht admits defeat but refuses to let them join the mission yet since they need more time to master it, with which Liebe agrees. Nacht leaves behind Gimodelo to continue Liebe and Asta's training.[28]

When a demon from the Spade Kingdom attacks the Clover Kingdom, Asta and Liebe arrive to fight it. As they fly towards the demon, they unite[29] and easily defeat the demon.[30] Shortly after, their transformation ends, and Finral Roulacase saves them from falling.[31]

Once they arrive in the Spade Kingdom, in their unite form, they fly into the room where Nahamah and Nacht are. They cut off Nahamah's hand,[32] and Liebe is delighted at the chance to fight the two highest-ranking devils from the first level of the underworld.[33] After the two devils fuse together, Liebe and Asta continue fighting them, and Liebe is thankful for Asta making him strong enough to take on these two devils. As the fused devils begins to panic, Liebe tells them that since they were the strongest in the first level of the underworld, they never knew fear before. The fused devil attempts to flee so that Liebe and Asta will run out of time in their United form, but Nacht restrains them long enough for Liebe and Asta to catch up and slice the fused devil into piece. Immediately after, Liebe and Asta separate and as they fall, they cross their marked wrists in celebration.[34] Nacht catches them and brings them down to the roof of the castle. Liebe shrinks and then holds onto Asta's shoulder, while Asta endures the full-body pain from using Unite.[35]

A short time later, they travel over to Dante's chamber and witness Magna defeat Dante.[36] Afterward, the Black Bulls head out to defeat the remaining members of the Dark Triad.[37]

After Asta stops Lolopechka's devil power from detonating, Liebe is surprised to see that another highest-ranking devil is present in the living world without another gate opening. He also admits that they would need Unite to defeat Megicula.[38]

Liebe has a deep hate towards all devils, cursing and calling them "scum" and proclaiming that he will kill all of them whatever it takes.[46] Being the lowest-rank devil, Liebe is tormented by higher-rank devils everyday while in the underworld.[47] Even when he reaches the living world, Liebe is not free from their torment as Lucifero, one of the highest-rank devils, seizes control of Liebe's body and kills his human foster mother, Richita.[48] This further increases Liebe's hatred toward devils and he attempts to take over Asta's body after realizing Dante Zogratis is possessed by Lucifero.[15] During the battle against Lilith and Nahamah, he was happy to finally face them and teaching his adversaries to feel fear.

Although resentful of most humans, Liebe cares deeply for his adoptive mother, Richita, who rescued him and then raised him as her own son. Her love and kindness changes how he views himself and the world.[49] Thus, when Lucifero kills her, Liebe is overcome with grief, which fuels his intense hatred for devils.[50][51]

Português do Brasil
Community content is available under CC-BY-SA unless otherwise noted.
Advertisement