Licht 「リヒト Rihito」 is the leader of the Elf Tribe[2] and one of its ten Apostles of Sephirah.[3] He was married to Tetia, a human woman and the sister of Lemiel Silvamillion Clover, the first Magic Emperor.[4]

His artificial body[5] has two sets of tattoos: on his cheeks, a vertical line under each eye and in the middle of his forehead, four dots forming a diamond bordered by curved lines.[6]

Licht is a kind and compassionate elf who sought peace between elves and humans.[7][8]

Since his resurrection, Licht has shown little emotion[9][10] and does not say much.[11] Seeing two elves defeated causes him to remember the massacre and incites him to fight Asta and Yuno.[12]

As children, Licht comes to Vetto's aid and tells him that they are friends and that one day, the elves and humans will understand each other.[13]

Years later, Licht receives a four-leaf clover grimoire and saves a human woman from a magical tornado.[14] Licht befriends Lemiel Silvamillion Clover, Tetia's brother, who also believes that elves and humans will live in peace.[15] Licht conceives a child with Tetia, hoping that it will unite the two peoples.[16]

Immediately following the wedding of Licht and Tetia, a group of human royals attacks the elves and steals their magic for themselves.[17][18] Licht is the only survivor since a devil orchestrated the massacre in order to corrupt Licht's grimoire and take his body. Licht recovers his mind when he sees that Lemiel was not involved. However, it is too late to stop the corruption of his body so Licht uses the magic stones to transform himself into a mindless Demon God, preventing the devil from possessing his body.[19] Lemiel is forced to kill Licht to stop his rampage, and Licht's skeleton is made into a memorial on the outskirts of Hage village. Secre seals Lemiel into a stone statue atop the skull.[20]

Five centuries later, Patolli is reincarnated into the body of William Vangeance[21] and creates the Eye of the Midnight Sun to finish reincarnating the other elves, which he believes to be Licht's plan.[22] Patolli has Sally create an artificial body for Licht's soul,[23][24] and the body is suspended in a giant sphere of mana within the Gravito Rock Zone's floating dungeon.

When the Royal Knights attack the dungeon, one of the teams reaches the central chamber where the body is.[25] At the same time, Patolli succeeds in collecting all of the magic stones and placing them in the sephirot. Light pours from the stone monument, and Licht and the other elves are resurrected.[26] Licht watches in silence as Klaus Lunettes and Hamon Caseus fight and defeat Mimosa Vermillion.[27] Rhya brings Asta before Licht, but the leader does not react to a human using his grimoire and swords.[9]

Seeing Klaus and Hamon defeated reminds Licht of the massacre, so he catches his brethren, carries them to the ground, and then draws the Demon-Destroyer Sword from the floor.[28] Asta and Yuno ready themselves for a fight, and Asta draws the Demon-Dweller Sword. Suddenly Licht appears in front of Asta and takes the sword. He fills it with his magic and releases a series of flying slashes, forcing the boys to retreat. Yuno tries a counterattack, but the Demon-Dweller Sword absorbs the Spirit Storm and releases it back at Yuno. When Yuno closes the distance and uses Mana Zone to attack Licht from behind, the elf once again absorbs the spell. However, before Licht can release the spell, Asta and Yuno charge at him.[29]

Licht deflects their attack with his other sword and lets it go. He then points the Demon-Dweller Sword at the boys and unleashes a magical blast, forcing them and Mimosa down and out of the dungeon.[30] Rhya questions why Licht sent away his grimoire and swords, to which Licht replies that the grimoire is no longer his. Ado then appears and brings the other elves in the dungeon into the central room, and the dungeon is steered toward the Clover Kingdom and their revived brethren.[31]

After reaching Clover Castle, the ten Apostles of Sephirah gather atop the dungeon and summon the Shadow Palace.[32] Licht and other elves then fly into the gate.[33] Licht waits in the uppermost chamber, guarding the exit. When the devil reaches the room, the two fight and the devil binds Licht's sword. Charla saves Licht by diverting the devil's Iron Spear, and Yami Sukehiro cuts through the bindings.[34] During the ensuing fight, Licht absorbs one of Yami's slashes and releases it back, severing the devil's tail. The devil then summons a creature from the underworld.[35] Licht is unable to stop the creature as it pours out of the room and down into the other chambers.[36]

Licht uses his magic to float above the creature. He is surprised when Lemiel later appears in the room and burns a path through. Lemiel and Secre fly over to Licht, and Secre unseals Licht's soul, fully awakening him. Licht thanks Lemiel for stopping him centuries ago, and then tells Patolli that, although the young elf committed unforgivable crimes, he tried his best to find justice and that they can fight the devil together.[37] The devil attacks the group, but Licht and Lemiel blast the creature back with Origin Flash Barrage and Lamp of Avior Gloria. The pair then attack the devil directly, flying around it and throwing swords of light. They are too fast for the devil, and Lemiel drives a sword through the devil's torso. However, the devil summons a demonic trident that shatters the sword and severs Lemiel's left arm. Before the devil can kill Lemiel, Asta blocks the weapon with his Anti Magic Weapon, which shocks Licht.[38] The devil forces Asta back and attacks with a Storm of Swords, which overwhelms the boy until Licht, Lemiel, Yuno, and Patolli come to his defense.[39]

Licht then raises his sword aloft, absorbs the magic of the elves within the Shadow Palace, and unleashes the collected power in a singular attack, which destroys the devil, its portal to the underworld, and a large section of the chamber. However, the devil's heart survives and regenerates the rest of the body.[40] 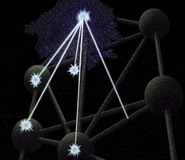 Licht with the Demon-Slayer and Demon-Dweller Swords 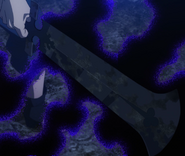 After helping save Tetia from a magical tornado, Licht became fast friends with her and her brother.[59] Licht and Tetia fell in love and conceived a child, sharing the hope that it would unite the Elf Tribe and the humans.[60] They eventually married, but the wedding was ambushed and the elves and Tetia were massacred.[17][61]

Licht and Rhya are close friends,[62] and Licht believes Rhya to be kind and empathetic at heart.[63]

Retrieved from "https://blackclover.fandom.com/wiki/Licht?oldid=51557"
Community content is available under CC-BY-SA unless otherwise noted.