Letoile Becquerel 「レトゥア・ベクレル Retua Bekureru」 is a noblewoman and a member of the Clover Kingdom's Golden Dawn squad of the Magic Knights. She also is the human host for the elf Kivn.[1]

Letoile is a bespectacled young woman of below average height with purple eyes and long, green hair tied in a ponytail. She is usually seen wearing the Golden Dawn's squad robes.

While possessed by Kivn, a red tattoo of concentric circles appears on her forehead and her ears become pointed.[2] 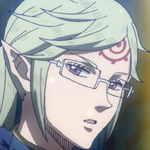 After Patolli sets the last magic stone in the sephirot, Letoile is possessed by Kivn and gathers together with the other possessed Golden Dawns.[3]

Later that night, all the remaining elves are exorcised after William Vangeance and Licht combine their magic to connect the elves to a giant tree through which Asta sends Anti Magic.[4]

A few days later, Letoile and another Golden Dawn encounter Langris Vaude and Finral Roulacase in a hallway of the Golden Dawn base. Finral asks the two women out on a date, and Langris chastises him for the behavior and storms off.[5]

Retrieved from "https://blackclover.fandom.com/wiki/Letoile_Becquerel?oldid=57510"
Community content is available under CC-BY-SA unless otherwise noted.