Lemiel is a young man with blond hair and blue eyes.

Lemiel wears a double-breasted, long-sleeved, white jacket with a high, dark-colored collar. The jacket extends below his waist and is trimmed with gold. He wears two belts on top of it, and his grimoire pouch hangs off the back of his dark-colored belt. He also wears white pants, white stockings and black shoes. Over this, he wears a blue cape with white fur trim at his collar and a bronze-like cross pendant to enclose his cape.

Lemiel's appearance as a statue

Lemiel is an eccentric young man, who is incredibly curious about magic. He also does not possess any prejudice towards commoners nor elves, unlike most human nobles. One of his goals was to create magical items that would benefit everyone, including those having little to no magical abilities.

On the day of Tetia and Licht's wedding, Lemiel is lured into Zagred's trap in the castle. Secre Swallowtail releases him and they race to the wedding venue but arrive too late to stop the Massacre of the Elf Tribe. To prevent Zagred from taking his body, Licht turns himself into a giant demon and asks Lemiel to kill him.[7][8][9]

Five centuries later, Secre and Finral Roulacase use the magic stones to awaken Lemiel. He launches all three of them toward the Shadow Palace and enters with Secre.[13] After passing through the gate, they appear in the topmost chamber and confront Zagred.[14] Lemiel and Secre fly over to Licht, and Secre unseals Licht's soul, awakening his memory and personality. Licht thanks Lemiel for stopping him centuries ago. The three fly over to the platform where Asta, Yuno, and Patolli are.[15]

Zagred attacks the group, but Lemiel and Licht blast it back with Lamp of Avior Gloria and Origin Flash Barrage. The pair then attack the devil directly, flying around it and throwing swords of light. They are too fast for Zagred, and Lemiel drives a sword through the devil's torso. However, Zagred summons a demonic trident that shatters the sword and severs Lemiel's left arm. Before the devil can kill Lemiel, Asta blocks the weapon with his Anti Magic Weapon, which shocks Lemiel.[16]

Lemiel helps defend Asta from another Storm of Blades, and Secre reattaches Lemiel's arm.[17] Lemiel watches as Licht draws on the elves' magic to help power a spell to destroy Zagred. However, the devil's heart survives and regenerates the rest of the body.[18] When Asta draws on more Anti Magic and loses control, Lemiel grabs the boy and helps protect him from the devil's magic, but the Demon-Slayer Sword reacts to Lemiel's magic and smacks him into a wall.[19] Resting while his magic restores, Lemiel is impressed by Yuno using the ambient magic to create a sword effective against Zagred's magic.[20] Lemiel then realizes that Yuno is the vessel for Licht and Tetia's son, but is confused who Asta is. Secre explains that the boy was born with no magic but refuses to give up.[21]

While Asta and Yuno continue fighting Zagred,[22] Lemiel and Licht combine their magic to send out protective auras to the elves, and Patolli protects Lemiel and Licht from the devil's magic.[23] Lemiel watches Asta and Yuno fight Zagred and is surprised when Yami's Dark Cloaked Dimension Slash: Equinox bisects the devil.[24] After Asta slays Zagred, the devil's magic still remains and is destroying the Shadow Palace. Lemiel continues sending his magic to the others, but his body begins cracking due to overexertion.[25] After one of his eyes falls out, Lemiel's magic runs out and the protective auras disappear. Fortunately, Valtos saves some of the groups of Magic Knights and elves and warps them up to the topmost chamber where the exit is.[26]

After the humans and elves return to Clover Castle, Lemiel watches as William Vangeance and Licht combine their magic to connect the remaining elves to a giant tree through which Asta sends Anti Magic, exorcising the elf spirits.[27] Lemiel bids farewell to Licht as the elf's soul departs.[28]

Lemiel and Secre stand on a broken tower and look out over the kingdom, while Mimosa, Asta, and Noelle are nearby. Lemiel thanks them for helping break Zagred's spell and thanks Asta for showing him that his hope for peace lives on. Suddenly Lemiel's body starts cracking apart. Secre wishes to go with him, but he tells her to live on. She clutches his hand as he crumbles away and thanks her for everything she has done over the five centuries.[29] 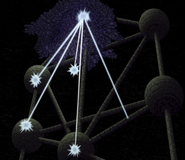 Tetia is Lemiel's sister with whom he shared a very close familial bond unlike the rest of their family. They are close that they share similar views and morals towards humans and elves and believe that both could live together in peace. When Tetia was attacked by Zagred at her wedding with Licht, Lemiel expressed both shock and sorrow over her suppose death. After Zagred's defeat and stopping the elves' rampage, Lemiel passes on and he expressed his desire to reunite with Tetia along with Licht.

Licht is Lemiel's best friend whom he met after saving Tetia from a magical tornado. Along with Tetia, the three shared a bond so close that Lemiel approved of Licht's marriage to Tetia which made Licht his brother-in-law. Together, they believed this would bridge a bond between humans and elves. Their friendship was almost estranged when Zagred tried to frame Lemiel for eliminating Licht's people during his wedding with Tetia, but this immediately came to pass when Lemiel arrived to Licht's aid. Lemiel expressed both shock and despair over Licht's request to stop him after the elf transformed into a demonic monster in order to resist the devil's plans to possess him. He shed tears when dealing the finishing blow to his friend.

When they reunite after five centuries, Lemiel expressed his relief and joy in seeing his old friend again where both made their amends to each other. After Zagred's defeat and stopping the elves' rampage, Lemiel passed on as he expressed his desire to reunite with Licht and Tetia.

Lemiel was very fond of Secre Swallowtail the moment she was appointed to serve him. Although Secre did not originally think much of the noble, Lemiel's kind nature and actions eventually got through to Secre. They developed a strong bond that lasted for five centuries in order to orchestrated a plan to stop Zagred who was sealed away but vowed to return. When Lemiel passed on, he gave his gratitude to Secre and tells her to live on with her new friends.

Zagred and Lemiel share a conflict that shaped the history of the Clover Kingdom which led to the legend of Lemiel becoming the first Magic Emperor. Zagred saw Lemiel as a means to an end and planned to frame Lemiel for the eradication of Licht's people in order to possess Licht's body. Because Zagred is the one responsible for destroying Lemiel, Licht, and Tetia's shared dream for a better future between humans and elves and forcing Lemiel to slay his dear friend after becoming a monster, Lemiel holds a strong animosity towards the devil.

While Zagred expressed his annoyance of Lemiel's return after five centuries, the First Magic Emperor convey strongly his determination to end the devil and his ambitions for good. Lemiel was both happy and relieved that the enemy who destroyed both him and friends' lives was finally defeated.

Lemiel first met the two young Magic Knights, Asta and Yuno, during their clash against Zagred. He showed interest in both boys' potentials as Magic Knights and their determination to stop Zagred. He complimented their strong wills and their respective abilities that he soon put faith in them to assist him in defeating Zagred.

After Zagred's defeat and exorcising all the elves from their rampage, Lemiel put his faith in Asta and Yuno as the new generation that will lead the Clover Kingdom into the better future that he desired long ago before passing on.