Langris Vaude 「ランギルス・ヴォード Rangirusu Vōdo」[1] is a nobleman of House Vaude, a 1st Class Senior Magic Knight and the vice-captain of Clover Kingdom's Golden Dawn squad.[2] He is from Tota, a village within the Clover Kingdom.[3][4]

He is the human host for the elf Ratri.[5]

While possessed by Ratri, two tattoos appear on Langris's forehead and run down to his cheeks, passing over his eyes, and his ears become pointed.[6] 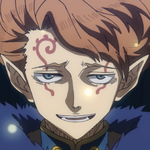 At first glance, Langris seems to have a pleasant, happy-go-lucky personality. He smiles even in the midst of battle, and possesses a great deal of confidence in his abilities. Like most nobles this borders on arrogance.[7] He also possesses a large degree of vanity and self importance that is characteristic of many nobles including their disdain for those they believe beneath them. Peasantry sticking up to him or overlooking him clashes with his world view and fuels his rage and inferiority complex.

However, Langris is also very sadistic, as he tries to kill his older brother after defeating him. Despite being known as the talented brother, Langris shows a deep grudge against Finral as Finral was always praised for being kind and well-liked by others. His hatred for Finral grows after seeing others rush to his aid after Langris cut him down.[8] During his fight against Asta in the Royal Knights Selection Exam, he shows no remorse for his actions and claims that he will always be superior to others, including Finral, due to his magic.[9]

Ultimately, at the root of Langris's personality is a deep insecurity that developed into an inferiority complex. Langris feels his parents only love him for his vastly superior magic compared to Finral, which has also stemmed into his leadership position of the Golden Dawn. He believes if he does not beat Finral in everything, he will not be loved or cared for by his family.[10] His desire to win and be loved because of it, has caused him to believe that winning ultimately makes one right, and since he has never lost, he believes (wrongly), that he is right about everything and special because of it and his talent. His rage is large and dangerous when provoked, with his brother easily setting him off, due to his fiance thinking that Finral is the better brother for his good-hearted nature, as opposed to Langris who has shown to be better than Finral in every way that Langris believes is important. He is also easily set on edge when he is mocked as when Asta berates him for injuring Finral or willing to sacrifice citizens for the sake of proving his perceived superiority. He also hates being overlooked such as when Yuno states he is going to become captain of the Golden Dawn, indicating in Langris's mind, that Yuno thought he was not worthy of being considered competition, only feeding his inferiority complex further.

Langris was born into House Vaude, which has long been known for their prowess with offensive Spatial Magic. Even at a young age, Langris shows more promise than his older brother at this magic, and is called a genius by the rest of his family.[11] When introduced to Finesse Calmreich, the fiancée of the next head of House Vaude, Langris finds her boring. Later, he eavesdrops on her and Finral's discussion and is angered when she considers Finral to be the superior brother.[12]

Years later, he joins the Magic Knights and after becoming vice-captain of the Golden Dawn squad, Langris also becomes the next family head instead of his older brother.[13]

When the Diamond Kingdom attacks Kiten, fourteen members, including William Vangeance, Langris, and Yuno, arrive to drive the invaders back.[14][15] After seeing Yuno's display against Broccos, William suggests that he and Langris join the battle, with which Langris agrees.[16] As Yagos is absorbing the Purple Orcas, Langris approaches and uses his magic to sever a large portion of the snail, a part of Yagos himself, and accidentally a section of a building behind.[17]

After the Black Bulls encounter Yuno, Langris appears on a rooftop and proceeds to insult his brother, but when Langris insults Charmy Papittoson and Asta, Finral confronts his brother.[18] Suddenly, Langris is attacked but easily defends himself. Yagos is seeking revenge and has taken multiple citizens as hostages. Langris determines that he cannot defeat Yagos without killing the citizens and decides to sacrifice them, but Asta stops him.[19] After the Black Bulls work together to defeat Yagos, Finral challenges Langris and Golden Dawn.[20]

When the Black Bulls leave, Langris joins Yuno on the ground stating that they were a vulgar group and that Yuno should choose his friends more carefully. Yuno states that he is proud of Asta and that Asta is his rival, which causes Langris to laugh and ask for what they are competing.[21] Yuno answers that they are aiming for the title of Magic Emperor. Laughing, Langris says that commoners must not feel embarrassment and adds that he would expect nothing less from the peasant chosen by a four-leaf grimoire. Yuno then announces that he first plans to become the Captain of the Golden Dawn, which Langris angrily notes overlooks him, the vice-captain.[22]

After Yuno's achievements are acknowledged at the Star Awards Festival, Langris stands to the side and thinks to himself.[23] During the king's speech, Langris is surprised by the announcement of the Royal Knights Selection Exam.[24]

A week later, Langris attends the exam[25] and is placed on Team G with Sekke Bronzazza and Fragil Tormenta.[26] After listening to the other Magic Knights praise Finral's skill,[27] Langris has Sekke carry them on his Shooting Star and, once in range, easily destroys Team H's crystal and its defense, winning the match for Team G.[28]

Afterwards, Langris approaches his brother and warns him to be careful in their next match as their parents and Finesse would be sad if Finral were killed by Langris's magic, but Finral claims that he will beat Langris so that will not happen, which Langris finds amusing.[29]

During their second match, Langris again rides around on Sekke's scooter. When they locate Team E, Langris attacks the crystal but Finral blocks it with his own Spatial Magic.[30] Langris issues a barrage of attacks for Finral to block and questions if Finral can keep up. Finral releases a slow-moving spell, which Sekke scoots around. To Langris's surprise, the spell changes direction and Langris jumps off the scooter and watches as Sekke is warped away.[31]

Finral declares that he does not wish to hurt Langris, who is disgusted by Finral's concern. The Golden Dawn then opens his grimoire and reveals his own spell, creating multiple floating orbs and releasing a sinister feeling mana.[32][33] Finral creates a matching array of orbs, and the brothers launch their spells at each other, resulting in multiple explosions. Langris outmatches his brother and his spell destroys Team E's crystal, winning the match for Team G, and carves out several chunks from Finral's body.[34] Langris approaches his brother and remembers everything that Finral does that infuriates him. He then prepares to kill his defenseless brother, but he is stopped by Asta, Magna, and Luck. Julius Novachrono reprimands the vice-captain for being willing to kill his fellow Magic Knight.

When Asta accuses Langris of not being a true Magic Knight, Langris asks Julius for permission to deal with the Black Bulls, but he attacks before receiving a response. Asta slices through the spell with the Demon-Slayer Sword, which further angers Langris, and Julius decides to let them fight it out.[35] Before they can clash, Julius freezes Asta and Langris in time and prepares the battlefield.[36]

After Teams B and G are assembled, Julius explains the rules and releases Langris and Asta. Fragil and Sekke offer their assistance, but Langris refuses and decides to fight on his own.[37] He tries to attack Team B's crystal, but Asta nullifies it with the Demon-Dweller Sword. Team B organize around their crystal, and Langris flanks them and unleashes a barrage, and as he continues his attack, it overwhelms Asta, damaging him and the crystal, and Mimosa's attempts to heal the injuries.[38][39]

When Zora Ideale interferes, Langris bends his spells around Zora's magic circle. However, when they strike Zora, they activate a magic circle on his body and are reflected back.[40] Langris cancels out the spells with another barrage and, after mocking Zora and Finral, attacks again, but Asta appears in his Black Asta form and nullifies the Spatial Magic.[41] Langris demands that Asta cower, before attacking again. Asta flies at Langris, slamming his sword into the vice-captain's stomach. Langris is surprised to find that he cannot use his magic, while Asta pushes him into Team G's crystal and destroys it with Black Meteorite.[42] At the same time, Team B's crystal shatters, ending the match in a draw. Langris then falls to the ground and lies there unconscious.[43]

Three mages attend to his healing[44] and, after the exam is completed, take him to the Royal Capital for questioning into his connection with the Eye of the Midnight Sun.[45]

Several days later, Langris is possessed by Ratri.[5] Later that night, all the remaining elves are exorcised after William and Licht combine their magic to connect the elves to a giant tree through which Asta sends Anti Magic.[46] 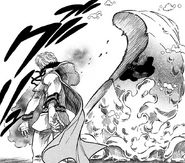