Ladros 「ラドロス Radorosu」[2] is one of the Diamond Kingdom's Eight Shining Generals.[3][4]

Ladros is a young man with medium-length, blond hair and pale skin. He has black scleras and red irises but no visible pupils.[5]

He has three small, red mage stones in a horizontal line in the middle of his forehead and a larger red stone on his sternum. They break after Asta strikes him with his Demon-Slayer Sword and Anti Magic.[6]

As a child, his eyes appear normal and he wears a plain white shirt and pants.[7] 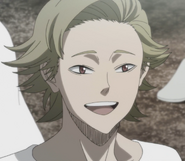 Ladros before the experiment 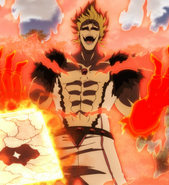 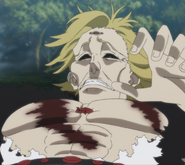 Ladros drained of mana
Add a photo to this gallery

Ladros is a selfish, rude and sadistic man who thinks about no one but himself. This is shown later in the manga when he kills all of his men without any empathy or grief. Another example would be when he was telling Asta that friends are used just to get stronger and once he rises to the top he no longer cared for them. He is also a megalomaniac.

After the gem imbedded in his forehead broke, he is now more "light-headed", resulting him to having a more calmer attitude, preventing him from proceeding to fight anyone.

Since he was born without a magic affinity, Ladros is ridiculed and treated poorly.[1][8] As a child, he trains along with Mars and Fana under Fanzell Kruger.[7]

After Fanzell leaves the Diamond Kingdom, Ladros undergoes the Kingdom's reconstructive surgery and gains the ability to absorb and emit mana.[9]

Years later, Ladros and the other new generation of the Eight Shining Generals hear about the failed invasion of Kiten from Lotus Whomalt.[10] Ladros and Mars lead the Diamond Kingdom's forces in an assault on the Witches' Forest, while Fana leads the Eye of the Midnight Sun's forces and attacks the forest from the opposite side.[11]

Fanzell confronts the Diamond Kingdom army, and Ladros does not initially recognize him but then gets excited at the prospect of facing his old teacher, firing a blast of mana. Fanzell easily cuts it and prepares to attack.[12] When Fanzell asks them to leave, Ladros explains that their king is dying and wants the secret to the Witch Queen's longevity, and that they will not leave without it. Fanzell charges past Ladros and Mars and attacks their soldiers.[13]

As Ladros watches the battle, he get excited and decides to jump in but is easily captured by Fanzell, who predicted Ladros's reckless impatience. Fanzell asks Ladros to leave again, but Ladros replies that Fanzell was the one who raised them to be killing machines and that they will not leave. Fanzell then slashes Ladros[14] but it is does not injure him. After Fanzell repels Mars, he attacks Ladros with a flurry of strikes, and Ladros pretends to be in pain as he easily absorbs the spell. Ladros explains to Fanzell how he gained the ability to absorb and expel mana from the kingdom's reconstruction surgery. Ladros then releases his mana in a sphere around himself, and after asking Fanzell if there is anyone about whom he cares, Ladros launches Million Laser, which devastates the battlefield and injures his own men as well as the witches.[15]

As Ladros looks over the devastation, he notices that Fanzell protected someone. Ladros kicks Fanzell aside and picks Dominante Code up, whom he manages to recognize as another defector. When Fanzell tells Ladros to use his powers for good, Ladros denounces and ridicules Fanzell and his idealism. When Ladros calls Fanzell a coward, Dominante fires a Magic Bullet into Ladros's face, so he throws her into the air and fires a blast at her. However, Mars interferes and blocks the attack.[16]

Mars reminds Ladros that their target is the Witch Queen, but Ladros points out that Fanzell and Dominante are traitors and that letting them live is also traitorous. Mars agrees, which excites Ladros as he has wanted to kill Mars. As Ladros prepares to fire a blast, Mariella ambushes him but Ladros absorbs the Ice Magic. Before Ladros can counterattack, Mars forces him up into the air. Ladros recovers and launches attacks towards the others, and Mars easily dodges the lasers and protects and heals Fanzell, Dominante, and Mariella. Ladros is chasing after them when Fanzell and Mars both hit Ladros and send him flying back.[17] They lead him to where the Black Bulls are fighting Fana, and Fanzell and Asta redirect Salamander's Breath at Ladros. The blast strikes him, and he falls to the ground seemingly defeated.[18][19] However, in truth, Ladros expelled all of his mana so that he could absorb the attack.[20]

After Fana is defeated, Ladros unleashes a barrage of lasers on the group. Seeing that Mars protected Fana, Ladros attacks him again but Asta blocks the attack.[21] Ladros tries to persuade Asta to join the Diamond Kingdom army while also planning to betray Asta, but Asta refuses as he plans to be the Clover Kingdom's Magic Emperor.[22] Realizing that Asta cannot attack at long-range without Finral Roulacase, Ladros flies into the air and attacks repeatedly. Asta tries to reflect lasers back, but Ladros absorbs them and fires more. While Ladros is gloating, Asta throws the Demon-Dweller Sword, which impales Ladros in the chest.[23] The sword drains Ladros's magic and he falls from the air. Ladros then panics as Asta approaches him and scolds him for his treatment of friends.[24] Ladros pretends to agree and asks Asta to remove the sword, but the boy refuses, acknowledging the general's strength. When Asta threatens to knock Ladros unconscious, the general uses his remaining magic to escape and to force the sword out of his chest.[25]

Ladros rushes over to Fana and Mars and demands that she unleash her huge power. When she does not understand, Ladros attacks Mars and threatens to kill him. Salamander emerges in response to Fana's desperation and attacks Ladros in a large explosion. However, Ladros emerges unscathed as he manages to absorb the spirit's magic, creating a fiery aura around himself.[26] Asta dashes forward to attack, and Ladros fires a laser than burns through Asta's shoulder. Ladros rejoices in his new power and attacks Asta repeatedly, knocking the boy unconscious.[27]

Ladros is surprised when Asta stands back up and is partially covered in Anti Magic.[28] Ladros fires a large blast, but Asta easily cuts right through it and dashes at Ladros. Scared, Ladros retreats up into the air and continues his attack, and Asta flies after him and defeats him with a slash.[29]

Ladros falls to ground and is too weak to keep fighting as all of his magic is gone, while the mage stones on his forehead and sternum break. Asta approaches Ladros, who tells Asta to kill him. Asta refuses and demands that Ladros help rescue the people he hurt as an apology, which causes Ladros to burst into a coughing fit of laughter. Both notice the change in Ladros's personality, and Ladros suspects it was the influence of the magic gems.[30]

The Witch Queen arrives to the battlefield and restrains all of them with her Blood Magic.[31] After Vanessa Enoteca defeats the Witch Queen, Ladros and the others are freed.[32][33]

Afterward, the Witch Queen heals everyone[34] and gives the two generals a bottle of her Puppet Bloodflow spell. Before returning to the Diamond Kingdom, Ladros promises to help Mars reform the kingdom. Although he says he wants to for power, he also wants to become someone Fanzell could be proud of.[35]

Million Laser
Add a photo to this gallery

Ladros's flying carpet
Add a photo to this gallery

Retrieved from "https://blackclover.fandom.com/wiki/Ladros?oldid=81337"
Community content is available under CC-BY-SA unless otherwise noted.