Kivn 「キヴン Kivun」[1] is an elf and is reincarnated into the body of Letoile Becquerel.[2]

While possessing Letoile, a concentric circles tattoo appears on Letoile's forehead and her ears become pointed.[3] 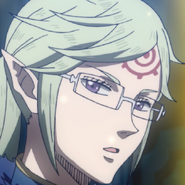 Like the other elves, Kivn expresses an extreme hatred for humans and royalty.[4]

After the Licht and Tetia's wedding, the Elf Tribe is massacred by humans.[5][6][7]

Centuries later, Patolli sets the last magic stone in the sephirot, and Kivn possesses Letoile Becquerel. She gathers with the other possessed Golden Dawns in the squad's base. They then leave together and meet up with Ratri, who has possessed Langris Vaude.[8]

Ratri leads the group to Clover Castle.[9] The Magic Knights guarding the gate refuse them entry, so Ratri carves a path through the gate. Kivn protects Ratri from the Knights' attacks and orders four elves to stay behind and fight the Knights. The rest of the elves then split up, with Kivn heading to the right section, the Silva estate.[10]

Kivn slaughters all of the humans she comes across, nobles and servants alike. She makes her way up through one of the towers and barges into Solid Silva's bedroom. She senses Solid and Nebra's royal lineage and declares her intention to kill them. When Nebra multiplies herself, Kivn's Useless North locates the real one and pierces Nebra's abdomen, causing her to crash to the floor.[11] Solid tries to attack but his magic fails to reach Kivn due to her magic aura. She launches several needles at him, but Nozel Silva bursts through the window and protects his younger brother. Noelle fires off Sea Dragon's Roar, which Kivn redirects up through the ceiling.[12]

Nebra raises a forest of mist so she and her siblings can escape. Kivn traps them within Another Atlas, which also disrupts their magic control. She launches series of needles, forcing Nozel to stay on the defensive.[13][14] Noelle decides to flood the room with her Water Magic, and Kivn is forced to release the spell before she drowns. With the magical disruption gone, Nozel strikes and binds the elf with his Mercury Magic.[15]

When Nozel is distracted, Kivn pierces him with three needles and makes a larger Another Atlas. Desperate to protect her siblings, Noelle creates a new spell: Valkyrie Dress.[16] Letoile is taken aback by the amount of magic concentrated in the armor and by how effortlessly Noelle avoids her numerous attacks. When Noelle gets near, Kivn uses Willful Compass to try and force her Noelle up into a spot where her needles will pierce, but Noelle overrides Kivn's control and her lance pierces through the compass.[17] Kivn is knocked unconscious and the Silvas are freed from her Another Atlas.[18] 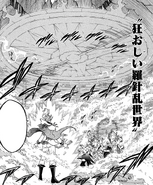