Kikka
Kikka 「キッカ」 is a town in the Common Realm of the Clover Kingdom.[1]

Kikka is one of the castle towns of the Clover Kingdom, due to its close proximity with the Noble Realm. The town is close enough that the citizens have a vivid view of the Kingdom's palace from it. Kikka is a well-developed town with paved roads and many large stone-based houses. The amount of houses established in Kikka suggests that it has a considerably large population.[2]

One of Kikka's prominent features is its strong trading center. Various merchants, from foods to weapons, come to Kikka for business, which makes Kikka's market one of the liveliest markets within the Kingdom. Many people, including the Magic Knights, come to Kikka for their errands.[3] 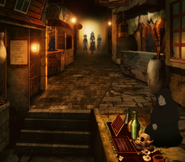 Retrieved from "https://blackclover.fandom.com/wiki/Kikka?oldid=69951"
Community content is available under CC-BY-SA unless otherwise noted.