Kaiser is a tall older man with pale green hair combed back into several curls. The sections above his temples are flared up and shaped like wings. He also has a pale green handlebar moustache.

While possessed by an elf spirit, two red tattoos appear on Kaiser's cheeks and his ears become pointed.[1] 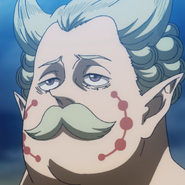 Kaiser possessed by an elf

Kaiser is a humble, polite, competent, and honorable man, taking on the role of Magic Knight Captain for the sake of his fellow squad members, even though he dislikes standing out.[5]

After Gueldre Poizot's removal from his position, Kaiser takes over as captain of the Purple Orca squad and, at Julius Novachrono's request, attends the annual Star Awards Festival.[4] Kaiser is not surprised when his squad ranks 8th.[6]

After the ceremony, Yami Sukehiro greets the other captains and brags about his squad's placement over theirs, and Kaiser reminds Yami that he should not miss meetings. The other captains then leave, refusing to celebrate with Yami.[7]

Weeks later, after Patolli sets the last magic stone in the sephirot, Kaiser is possessed by an elf spirit.[8] Later that night, all the remaining elves are exorcised after William Vangeance and Licht combine their magic to connect the elves to a giant tree through which Asta sends Anti Magic.[9]

Six months later, after the Golden Dawn's and Black Bull's bases are attacked and their captains are abducted, the remaining captains gather for a meeting and are briefed on the Dark Triad's plot. However, the meeting is interrupted by the sudden arrival of Nacht Faust and Asta.[10] After Julius vouches for Nacht's identity as the Black Bull's vice-captain and a spy in the Spade Kingdom, Kaiser listens as Nacht explains the Tree of Qliphoth's ritual and structure. Afterward, Nacht expresses his desire to build a team around Asta and his Anti Magic in order to rescue Yami and William and to destroy the Tree of Qliphoth.[11]

Three days later, when one of the Spade Kingdom's demons attacks the Clover Kingdom, Kaiser and group of Purple Orcas try to hold the demon back, but it is too powerful and disperses all of their spells.[12] 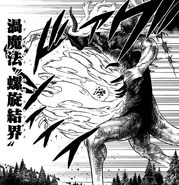