Kahono is a slender girl with red eyes. Her dark red hair is gathered into a long ponytail and decorated with seashells. She wears a gold chain necklace with a whale pendant.

She wears a white, sleeveless dress made of scales and a red belt. Her grimoire bag hangs off the left side of her belt. She also wears a pair of sandals with two red straps like her belt.

As a priestess, she wears a dolphin mask, a pair of large pink pants, a white shirt, and a wide gold belt. Over all this, she wears a white hooded robe that is clasped at her throat by a Seabed Temple pin. The edges of the robe are red, while the sleeves have sections of pink scales.

Kahono finds the sound of waves to be relaxing.[4] She is also tremendously cheery, possessing a bubbly demeanor. Other than her energetic and lively personality, she is very supportive, as shown when she talks with Noelle about her magic. The Seabed Priestess is demonstrated as confident, having high beliefs that her dream will come true, as shown when she talks to Noelle about her throat issue.

Kahono was born in the Seabed Temple where she and her older brother, Kiato, spend years practicing their Song and Butoh Magic in worship of the Sea God.[5]

While Kahono practices her singing on the beach of Raque, Asta and Noelle Silva approach her.[6] She is embarrassed when she notices them watching, and decides to introduce herself, telling them about her dream of becoming a singing and dancing idol for the money. She notices Asta's fatigue and heals him with a song, impressing Noelle. Kahono then tries to charge Asta for it. Amused with them, she accepts them as friends and then explains to Noelle that she should let loose her mana rather than suppress it. Because she thinks that focus comes from mental peace, Kahono asks Noelle if she has any good memories of her family. In a darker mood, Noelle leaves to practice, much to Kahono's confusion.[7]

Over several nights, Kahono and Asta help Noelle to train, with both cheering her on and Kahono healing her fatigue. When Asta convinces Noelle to let her magic run rampant, Noelle is taken aback. As Noelle's concentration wavers, her squadmates appear and cheer her on. Reflecting on her happy memories with the Black Bulls, she successfully casts Sea Dragon's Cradle. Her squad congratulates her, but Kahono disappears and says that she will be waiting in the Seabed Temple.[8]

When the Black Bulls reach the temple, Gifso challenges them to the Temple Battle Royale and summons the priests, before spreading the fighters around the temple.[9] Kahono confronts Charmy Pappitson and sings her to sleep with Mother Lullaby.[10]

Kahono encounters Noelle and removes her dolphin mask.[11] When Noelle questions if Kahono is only using her to leave the temple, Kahono denies it and insists that they are friends. Kahono tries to put Noelle to sleep but the lullaby is stopped by Sea Dragon's Nest, so Kahono shifts to offense and barrages the barrier with Destruction Beat. Noelle tries to blast Kahono with water but the attack diverts, and Kahono criticizes Noelle for her lack of conviction.[12]

Their fight is interrupted by Yami Sukehiro's announcement that the Eye of the Midnight Sun has invaded the temple, and Gifso announces a change in the game's rules.[13] Kahono and Noelle race to Vetto's location. Kahono hits his arm, forcing him to let go of Asta, and the girls repeat Asta's comment so Vetto can understand.[14] After Asta tries to sneak attack Vetto but is batted away, Kahono saves him from crashing into the wall.

She then yells at her brother for lying down, and they combine their magic, with Kahono's Song Magic enhancing his Butoh Magic. As Sea God Slash forces Vetto back, Kahono declares that the spell will never be broken because it is proof of their bonds. However, Vetto easily rips off Kiato's foot and crushes Kahono's throat.[15] Gifso summons two Monster Toys to protect his granddaughter but Vetto destroys them and then lifts up Kahono by her hair. She glares at him and he offers to tear her apart, before Noelle demands that he let her go. Seeing that Noelle is shaking, Kahono uses her magic to whisper encouragement to her friend.[16]

Preparing to take on Noelle's Sea Dragon's Roar, Vetto tosses Kahono aside.[17] The girl then uses her magic to heal Asta.[18] Vanessa Enoteca's Thread Magic then saves Kahono and the others from Vetto's Demon Beast Magic.[19]

After the battle, Gifso hugs his grandchildren.[20] Kahono and Kiato are placed in the temple's infirmary, where Noelle visits them. When Noelle apologizes for not protecting them better, Kahono thanks her for protecting the temple and confirms that her dream of becoming a singer is still alive. As Noelle leaves, Kahono notices that Kiato is infatuated, and thinks that he has no chance with Noelle.[21] Later that night, the temple citizens all bid farewell to the Black Bulls, and Kahono promises Asta that she will not give up on her dream.[22]

Asta invites Kahono and Kiato to the Star Awards Festival. Once there, he uses a bottle of Witch Queen's magic to heal Kahono's throat and Kiato's leg. Kahono hugs Noelle and sings, which attracts the attention of those nearby. She then suggests that they go on a double date.[23] Trying to make Noelle jealous, Kahono hooks Asta's arm and leads him around, and the four enjoy the festival.[24]

After winning a prize, Kahono asks Asta what he thinks of Noelle, but before he can answer, they notice a young girl lost and crying. The four use their magic to comfort Emma, with Kahono singing about Asta. Kahono then sends her voice around the festival, asking for the girl's mother.[25] Once Emma and her mother are reunited, Asta answers Kahono's earlier question, saying that he likes her. Embarrassed, Noelle sends him flying, and Kahono notes that Noelle is really a tsundere, and suggests that she and Noelle hang out by themselves.[26]

During the awards ceremony, Kahono watches with Noelle and her brother and cheers when the Black Bull squad is ranked second.[27] Kahono praises Noelle and predicts that the Black Bulls will be first next year.[28] Afterwards, Kahono and Kiato return to the temple without getting to say goodbye to Noelle and Asta due to the two Black Bulls being kidnapped by Mereoleona Vermillion.[29] 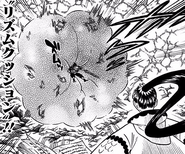 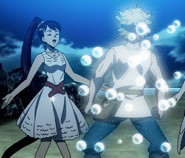 Brother and Sister of the Seabed Temple, they are close-knit siblings and even practice Union Magic together, using their Butoh and Song Magic, respectively. Kiato adores his little sister; especially her determination and perseverance to see a situation through.

Kahono meets Noelle Silva whilst singing, alone, atop a rock on the beach above the Seabed Temple. Noelle was impressed by her singing and magic control. Their friendship began after Kahono assisted Noelle mastering Sea Dragon's Cradle. They would meet again in the Seabed Temple as competitors in a Team Battle Royal. While Noelle expressed both shock and concern over the idea of fighting Kahono, Kahono claims that close friends should fight with everything they have for the sake of their dreams. During the fight against Vetto, Noelle showed great anguish in seeing Kahono unable to talk. Afterwards, Kahono was thankful for Noelle's concern. The two have since become best friends. Kahono is supportive of Noelle's feelings towards Asta and has tried to make Noelle more honest with her feelings like going on a "double date" with Noelle, Asta and her brother, Kiato - much to Noelle's dismay.

They meet at the same time as Noelle. Upon their first meeting, Kahono immediately became friendly towards Asta. She shows a kind gesture towards Asta by healing his fatigue, then jokingly charging him for the healing. Despite their rather short interactions, the two became close friends that she used the last of her magic and strength to heal Asta during their battle against Vetto. In turn, Asta went out of his way to help Kahono heal her voice using magic he obtained from the Witch Queen. Because Kahono supports Noelle's feelings towards Asta, she has tried to get Asta to realize Noelle's feelings and hook them up. An example is when Kahono goes running off with Asta at the Star Awards Festival on a double date to spur Noelle into being more honest with herself. 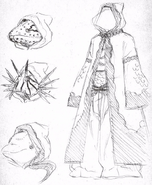