Start a Wiki
watch 01:18
'Black Clover' Profile: Jack The Ripper
Do you like this video?

Jack the Ripper 「ジャック・ザ・リッパー Jakku Za Rippā」 is the captain of the Clover Kingdom's Green Mantis squad of the Magic Knights[2] and a former commoner.[3]

Jack is a tall, lean man with gold eyes and loose, medium-length black hair. On the left side of his face, he has a thin, red scar (or birthmark) running from his forehead down to his chin, passing over his left eye and ends at the left side of his mouth. He possesses very sharp facial features, such as sharp eyes and a slit-like mouth.

Jack wears a light green shirt that only covers the upper half of his torso, leaving his abs uncovered. He wears form-fitting black pants, with green portions (the same green color as his shirt) that cover from the halfway point of his shin up to the halfway point of his thigh on both legs. He wears shoes with the same green color as his shirt. Jack wears two small wristbands on each wrist, and two straps on his waist that cross together to form an x on his front, which carries the pouch that his grimoire is in. He wears his Green Mantis robe on top of everything, which has four long leather strands that drape down.

Six months after the elves' attack, Jack has begun combing back the hair on his left side. His squad robe is held by a chain, which leaves it more open in the front. The back of the squad robe has been redesigned to look more like insect wings and has a four-pointed star at the center of the back.[4]

Jack is always grinning[5] and enjoys fighting and cutting things.[6][1]

He has a habit of running his tongue along his magic blades.[7]

After defeating a foreign invasion, Jack returns to the Royal Capital with Julius Novachrono and other captains of the Magic Knights. They are welcomed with joy and cheers from the Noble Region's citizens.[8]

Jack, Nozel Silva, and Charlotte Roselei save Yami Sukehiro from the combined attack of Rhya, Vetto, and Fana.[12] He squares off against Vetto, but when Fana melts Nozel's Silver Spears, Jack teases him and suggests switching opponents, which Nozel refuses.[13] Like the others Jack is surprised when Asta makes it through the battlefield unscathed and lands a hit on Licht.[14][15]

When Patolli's mana is unleashed, Jack tries to attack Patolli but the attack is absorbed.[16] When the Third Eye seals Patolli's mana and leaves, Jack thinks about how strong they are and says that they are worth slicing up.[17]

Sometime later, Jack is waiting in a room within the Magic Knight headquarters with most of the other captains. While waiting Jack talks with Yami and Gueldre Poizot about the situation with the Eye of the Midnight Sun and about the stars that they all received. When Rill Boismortier tries to defuse the situation with an impression of Fuegoleon Vermillion, Jack gets angry and tells him to not get carried away just because Rill is the youngest captain in history.[18]

After William Vangeance arrives, Marx calls the captains to the dungeon. There, they listen to Catherine and George name Gueldre as the traitor.[19] Jack says that he knew that Gueldre had his hands in some dirty stuff.[20] When Gueldre runs, Jack activates his magic but is disappointed when Gueldre is captured before he could attack.[21] Jack then watches along with everyone else when they look into Gueldre's mind and find everything that he had done. Julius tells the captains to keep what they have found out a secret. The captains later leave and return to their squads.[22]

At Julius' request, Jack and the other Magic Knight captains attend the Star Awards Festival.[23] He is mildly upset when his squad places sixth again, and teases Rill Boismortier for placing last.[24] After King Augustus Kira Clover XIII takes the stage, Jack laughs at Asta and Yuno's blunt response to the king's announcement. As the ceremony ends, Jack is planning to use the Royal Knights Selection Exam to boost his squad's reputation.[25]

After the ceremony, Yami greets the other captains and brags about his squad's placement over theirs, for which Jack warns him about getting cocky. The other captains then leave, refusing to celebrate with Yami.[26]

A week later, Jack selects Sekke from his squad's rookies to participate in the exam.[27]

Several days after the Royal Knights Selection Exam, Jack receives an alert from Marx Francois that Julius is fighting Licht.[28] Jack makes his way to the capital and assists Yami in fighting the elves at the gates of Clover Castle.[29] With Finral Roulacase's assistance, the two captains defeat the remaining elves. Afterward, Jack threateningly compliments Finral, and Yami threatens him back.[30] The three then notice the arrival of the floating dungeon, and Jack looks forward to the challenge. The remaining Royal Knights also arrive[31] and the group splits into three, with Jack, Yami, and Finral heading to defend the Kira Estate.[32]

Jack and Yami defeat the elves spread out through the estate and catch up to Finral who went on ahead to the throne room. Finral then warps them over to attack Ratri, but the elf's magical defense erases Jack's blade and forces them back.[33] When Ratri prevents the king's escape, Jack wildly slashes at the elf. Although the cuts do not reach Ratri, they destroy the wall behind the king, dropping him out of the building. Ratri attacks with a volley of Archangel Shootdown, and Jack is forced to dodge some when Finral is unable to counter all of them.[34] As the attacks continue, Jack's magic adapts and is able to cut apart Ratri's Spatial Magic. Jack and Yami attack together and destroy Ratri's defense. Ratri keeps up his attack and forces the two captains out of the room, but Finral warps them back in.[35] Jack slices through Ratri's counter, while Yami tries to knock the elf out. Ratri remains conscious and Yami pulls Jack and Finral out of the counterattack. Jack watches as Ratri destroys the throne room and as Finral warps the elf over to himself and punches him.[36]

Jack and Yami then look up at the dungeon and consider attacking it.[37] They are stopped when the Apostles of Sephirah summon the Shadow Palace.[38] A group of elves fly down from the dungeon to attack the remaining humans but are stopped by the Black Bulls base.[39] Jack and Yami follow the elves entering the Shadow Palace and leave the Black Bulls to handle the remaining elves.[40]

Jack finds his way to the room where Fana and Noelle Silva are fighting. He slashes at the elf, who regenerates, which entices the captain.[41] During the fight, Jack watches as Fana's magic is drawn to power Licht's spell.[42] When their fight resumes, Jack gets closer and closer to adapting his blades to sever Fana's regeneration. Suddenly Zagred's magic floods down from the opening in the ceiling right above Fana. Nozel saves the elf[43] and then pulls the Magic Knights over to his mercury platform, just as Licht and Lemiel Silvamillion Clover send out protective auras to the elves.[44]

After Zagred is defeated, the magic does not disappear, and Fana leads the Magic Knights to the topmost chamber where the exit is.[45] When Lemiel's magic gives out and the protective light disappears, Valtos saves the Magic Knights and elves with his Spatial Magic.[46] The humans and elves return to Clover Castle, and on the way back, Jack promises to cut up Fana.[47] Jack then watches as William, Licht, and Asta work together to dispel the Reincarnation Magic and exorcise the elf spirits.[48]

A few days later, Jack is overseeing the clearing of rubble. He threatens Rades Spirito and Gueldre when they stop working to discuss Asta's trial.[49]

Six months later, after the Golden Dawn's and Black Bull's bases are attacked and their captains are abducted, the remaining captains gather for a meeting and are briefed on the Dark Triad's plot. Jack mocks Yuno's appraisal of the Dark Triad's strength. Dismissive of the situation, Jack decides to leave early, and Nozel warns him not to think about attacking the Spade Kingdom on his own, which infuriates Jack and sparks an argument among Jack, Charlotte, and Nozel. Fuegoleon tells them to control themselves, but they are all interrupted by the sudden arrival of Nacht and Asta.[50] Jack and three other captains stand to attack the strange intruder, but Nacht summons four masked creatures to hold them. After Julius vouches for Nacht's identity as the Black Bull's vice-captain and a spy in the Spade Kingdom, Jack remembers seeing Nacht as a Grey Deer, but Nacht says that that man is gone. The captains stand down and listen as Nacht explains the Tree of Qliphoth's ritual and structure. Afterward, Nacht expresses his desire to build a team around Asta and his Anti Magic in order to rescue Yami and William and to destroy the Tree of Qliphoth.[51] 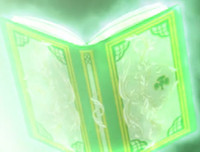 Retrieved from "https://blackclover.fandom.com/wiki/Jack_the_Ripper?oldid=71276"
Community content is available under CC-BY-SA unless otherwise noted.