Henry is a pale young man with long, untidy white hair, which is home to several birds.

His attire consists of a white, long-sleeved shirt and pants. Over his shirt, he wears the Black Bull robes.

Henry is a compassionate man who cherishes his comrades greatly.[5] He is willing to sacrifice himself to save and protect them.[6]

He also talks very slowly, much to Gauche's annoyance.[7]

Henry was born a noble, but his strange illness, which requires him to siphon magic from others, forced his family to live in a secluded house in the Common Region.[2] Years later, his parents left the house and never returned. After a few months alone, Henry is near death when Yami Sukehiro discovers his room and recruits him into the Black Bull squad.[3][8]

Over the years, Henry watches the other members in the base and comes to consider them all friends.[9] Sometime after Asta joins the Black Bulls, Yami tells the boy about Henry.[10] Asta introduces himself and the two become friends and hang out with each other, unbeknownst to their other squad mates.[11]

Months later, when Rades Spirito threatens to destroy the base and its members, Henry emerges from his room.[12] While slowly trying to introduce himself, Henry evades and protects his squadmates from No.0 - Michael Caesal's attacks.[13] Henry then rearranges the whole base into a giant bull.[14] Henry dons his squad robe and, using the wealth of mana he gathered from his squadmates, has the base deliver a spinning punch to Michael Caesal and then launch its left fist, smashing the corpse into the ground.[15]

Sally creates a Huge Sticky Salamander to challenge the base. Henry tries to punch the salamander but the fist is caught by the Gel Magic. Sally increases the viscosity of the gel and swamps the base with it, pushing it over onto the ground.[16] The other Black Bulls come to Henry's aid, freeing the base. Rades tries to ambush them, but Henry defends his friends with one last spinning punch, which defeats Michael Caesal.[17] As the Black Bulls celebrate their victory, Valtos reappears and then disappears with the Eye of the Midnight Sun members. Gauche Adlai questions if the base can be fixed, to which Henry expresses doubt.[18]

After being saved from the Arrows of Judgment, Henry and the other Black Bulls notice light coming from the horizon. Suddenly Gauche begins glowing[19] and is possessed by Drowa.[20] The elf turns on Gauche's squadmates and attacks them.[21] Drowa defeats them before departing for the Royal Capital, leaving the base in ruins.[22]

When Luck Voltia, Asta, Vanessa Enoteca, and Magna Swing return to the base, Henry accidentally absorbs Magna's magic power, so Asta introduces Henry to the rest of the squad. Henry, Gordon Agrippa, and Grey then tell the others about Gauche's possession.[23] Upon her return, Charmy Pappitson finds her vegetable garden was destroyed and demands that the others join her in taking on the Eye of the Midnight Sun. Since the others are weakened, Charmy has Sheep Cook: Master Chef prepare food for all of them. Asta convinces Henry to join them, despite Henry's concern about draining their magic more. Once Henry's magic returns, he reshapes the base into a running bull and carries his squadmates to save the kingdom.[24]

Luck directs them to Hecairo which is under attack from three elves.[25] The elves sense the approaching base and erect a massive wall to block its path, but the base charges through. Henry then shifts the base back into Combat Style and tries to smash the elves, who dodge out the way.[26] Vanessa uses her Red Thread of Fate to defend the base, while Henry prepares a counterattack, launching Magna's, Luck's, and Gordon's spells from cannons and increasing their spells' power. The three elves are hit directly, and before the three can complete a spell to destroy the whole town, Henry launches Asta from a cannon.[27]

After the three elves are exorcised, Rades, Sally, and Valtos reappear[28] and Henry watches the negotiations from inside the base.[29] Once the three agree to join the Black Bulls in saving the kingdom, the base is teleported directly to the Royal Capital.[30]

When a group of elves jump down from the floating dungeon to attack Clover Castle, the base is teleported to inside the castle's courtyard and punches the elves.[31] The elves regroup and attack the base. Using Luck's mana-sensing, Henry hits some of them with elemental blasts from the base's cannons. After avoiding the other attacks with the help of Rouge, Henry punches the remaining elves.[32]

Reve then drops down and pulls the upper section of the base into her Glamour World. Henry is left confused as he can still sense the magic of that section. Patolli and Drowa then combine their magic to break apart the rest of the base.[33] The group lands safely in a pile of cotton that Grey transmuted from Gordon's Poison Magic. Henry warns the others to keep their distance from him because of his magic absorption. Yami yells at them to surpass their limits and handle the elves there while he heads into the Shadow Palace, to which the Black Bulls agree.[34]

Drowa summons an array of mirrors and reflects Eclat's Eye Magic, magically binding all of the Black Bulls and other Magic Knights. Asta's Demon-Destroyer Sword surges with Anti Magic and frees Henry, Asta, Gordon, and Grey. Drowa attacks them with beams of light but the Black Bulls defend themselves, with Henry raising a section of wall to block. The Black Bulls declare that they will return Gauche back to normal.[35]

After Drowa teleports Asta up into the air, the other three launch a section of the base around the boy, protecting him from a barrage of attacks. Drowa eventually breaks through, but Asta has managed to activate his black form.[36] Asta flies up to Drowa and accidentally looks into a reflection of Eclat's eye. Henry creates a small version of the base and rockets up to the top of the floating dungeon, and Gordon and Grey create a mirror shell over Asta that disperses Drowa's attack.[37] When Drowa creates a distraction for Asta's Anti Magic and a large reflection of Eclat's eye, Henry calls the others into the mini base and Grey turns the outer surfaces into mirrors. The base flies at Drowa but he teleports it away and attacks from behind.[38]

Planning to sacrifice himself to create an opening for the other three, Henry jettisons them and dives at Drowa. As the base breaks apart, Henry begins absorbing the elves' magic. It is not enough to drain them completely and Drowa prepares to blast Henry. The others refuse to let Henry die, so Gordon covers the mirror ball with poison, while Asta throws Grey, who is transformed into his Demon-Slayer Sword, at Henry. Grey releases the transformation and crashes into Henry, saving him from the blast. The two land in a pile of cotton.[39] 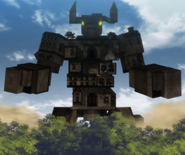 Due to Asta being magic-less, he and Henry can spend time together without risk to Asta and the two have become close friends.[43]

Although Henry thinks Gauche Adlai is very creepy,[44] he still considers him a friend and will fight to protect and save him.[14][6]

Retrieved from "https://blackclover.fandom.com/wiki/Henry_Legolant?oldid=54713"
Community content is available under CC-BY-SA unless otherwise noted.