Heath Grice 「ヒース・グライス Hīsu Guraisu」[1] is a commoner from the Clover Kingdom[2] and a member of the Eye of the Midnight Sun.[3]

Heath is a slender man with slanted eyes. He is very skinny, which can be seen from the tone of his face, and also has a large chin. Additionally, he has short grey hair combed backwards. One of his most prominent features is the scar at the right-hand side of his forehead, which is elongated across his face all the way to his left cheek.

Heath wears an attire similar to a military uniform, which is also worn by his three subordinates. A black jumpsuit covers his entire body with two belts strapped around his neck. On top of it, Heath wears a light blue shirt that has elbow-length sleeves and that extends down to his knees. The shirt also has a short cape that only covers his chest area. The cape has circular ornaments at the circumference and a hood.

Furthermore, Heath also wears a three-way belt, which is strapped around his torso. In addition, he wears three more black belts around his waist, where he also places the pouch to carry his grimoire. Finally, he wears a pair of black boots.

He also has a pocket watch, which he uses frequently. The watch has a circular design with a button at the top. The button consists of a short tube with a sphere at the top, which is connected to another pair of tubes that are protruding to the sides. The tubes have an arc that connects them to each other. The watch has Roman numerals for the hour marks, and the hands are needles with a circular design near the tip. The pocket watch is in the possession of the Magic investigation department after Heath's death.[4]

Heath is a calm and calculative person who is able to analyze his opponent and implement counter-attacks during his fights.[5] Such examples are his analysis of Asta's abilities and execution of a move to dampen Asta's momentum when he charges toward him.[6]

Heath also has a penchant of checking his pocket watch whenever he can, and he tends to put a timer on everything he does, such as his plans to execute the villagers in 3 seconds or breaking into Noelle Silva's spell in 25 seconds.[7][8]

Aside from being calculative, Heath is also very ruthless. He thinks of people who live in the Forsaken Realm as nothing more than beasts who do not deserve any attention from people of higher status.[9] This also leads him to underestimate and mock people whom he believes to be inferior.[10] He also does not hesitate to take life as he can calmly perform an execution on anyone, even himself.[11]

In contrast, Heath is also shown to have a sense of loyalty, as shown when he willingly commits suicide to keep his employer's secret from being unveiled.[12][13]

One day, Heath receives a mission in which he and three other mages are to search for a certain object. Heath visits Sosshi, which is located at the Forsaken region of the Kingdom. As he arrives, the chief of the village, Seihi, tries to hinder their mission, but Heath kills him.[14] After that, he decides that he needs to eliminate the villagers before they could fulfill their main objective.[15] Heath and his subordinates gather all the villagers to the center of the village to execute all of them, but he fails to do so when Magna Swing interferes by neutralizing his attack with a Fire Magic spell. Seeing that someone is messing with the timing that he predicted, Heath launches an attack toward them, but once again his attack fails to eliminate his opponents.[16]

Heath remains unfazed when one of his subordinates points out that the mages are members of the Black Bull. One of the mages, Asta, asks him about his reasoning on conducting such an act of attempted murder. Heath decides to give an answer that discriminated against the villagers of the Forsaken region rather than revealing his mission. He then combines his magic with his subordinates magic in an attempt to assault all of them continuously and finish the fight as soon as possible. Unfortunately, his plan fails as one of the mages whom he insulted, Noelle Silva, casts a spell that protects all of them.[17]

Heath is then ambushed by Asta, but he manages to soften the blow by freezing the ground where Asta was standing and quickly launches a counter-attack. He continuously tries to put Asta down while trying to break Noelle's spell. Suddenly Magna enters the fight by launching multiple fireballs at him and his subordinates. Feeling underestimated, Heath casually blocks the attack with his Ice Magic before realizing that a second wave of attacks are coming from behind him as Asta deflects most of Magna's attacks back at them. Realizing that the fire from the attack will not fade, Heath tries to freeze it but is surprised when Asta once again ambushes him.[18][19] Asta's attack manages to cause Heath to faint.[20]

When he regains his consciousness sometime later, Heath is restrained by Magna's magic, unable to use his magic. As Heath learns that he will be taken in for questioning, he uses a magic tool inside him to commit suicide along with two of his subordinates to make his employer's information a secret. As the remaining pieces of the men fall, their grimoires disintegrate, the only remnant being Heath's cracked pocket watch.[13] 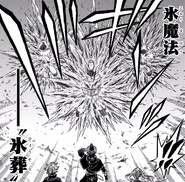