Hamon is a chubby man with a brushed back, blond hair with some strands spun and sticking upwards.

He wears a double-breasted and long-sleeved shirt with a high collar and red trimmings on the edges. The collar also has a chain connecting both ends of the collar as an ornament. The shirt itself is made of two different colors where it is white at the side and red on the middle. The sleeves are mostly in white fabric, except the wrist area where it is red fabric. The shirt extends below his waist and Hamon also wears a light-colored sash on top of it. Furthermore, Hamon also wears a casual white pants and a pair of high boots to complement it. The black boots also have fur around the collar.

Hamon wears the Golden Dawn's signature squad robe, which covers his torso and is gold in color. The fabric has an intricate design with a similar color palette as the robe. It also has a blue-colored fur around the border of the hood and a pair of blue ropes coming from the left shoulder and connected to the gold-colored button on the right shoulder. The button keeps the robe properly in place. The squad's insignia is positioned at the left-hand side.

While possessed by an elf spirit, two tattoos appear on Hamon's cheeks and his ears become pointed.[4]

Hamon Caseus as a Royal Knight 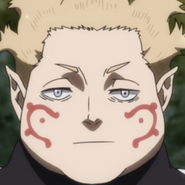 Hamon possessed by an elf 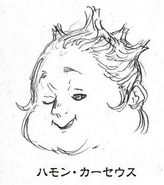 Hamon is a cheerful man who enjoys eating and sharing food with others.[5][6]

Hamon is invited to a War Merits Conferment Ceremony at the Magic Knights headquarters, which he attends with Alecdora Sandler and Siren Tium. Julius Novachrono arrives and brings five lower-ranked Magic Knights along with him to attend the ceremony.[7] During the ceremony, Hamon is promoted to a 2nd Class Intermediate Magic Knight for collecting seven stars.[2]

At the end of the ceremony, Hamon and the other Magic Knights are invited to a celebratory banquet that the Magic Emperor had prepared.[8] After Julius leaves to attend another matter, several Knights begin to scrutinize the unwanted guests that Julius had brought, but Hamon does not participate.[9] As Asta and the others bicker and shout among themselves, Hamon wonders if they cannot be quiet.[10]

Suddenly someone enters the banquet hall and informs everyone that the Royal Capital has been invaded.[11] After a strategy meeting with the rest of the Knights, Fuegoleon Vermillion orders the Golden Dawns to split up and protect the Royal Capital's Northwestern and Eastern Districts. Hamon then rides with Siren and Klaus Lunettes in Klaus's steel chariot.[12] Arriving in the Eastern District, Hamon comments that seeing the corpses has made him lose his appetite. However, he resolves to destroy them[13] and tears them apart with Verre Fleur.[14]

After all the corpses are defeated, Valtos activates Blackout and transports Hamon and the other Magic Knights a considerable distance away from the Royal Capital.[15]

The stranded knights combine their magic power together to create a composite spell that quickly carries them back to the Royal Capital. Hamon comments that combining their power was not so bad.[16] After the Eye of the Midnight Sun members retreat, Hamon watches as Mimosa Vermillion heals Fuegoleon and Leopold Vermillion.[17]

After Fuegoleon and Leopold are taken to the medical ward and the city's defenses have been recovered, Julius returns with Asta, surprising the Magic Knights.[18] The Magic Knights and Julius go over the events of the invasion, and the Knights all promise to increase their strength, before returning to their squads' headquarters.[19]

Months later, Hamon attends the Royal Knights Selection Exam[20] and is placed on Team E with Leopold and Finral Roulacase.[21] As their first match begins, Hamon argues with Leopold about whose magic to use, before Finral suggests using his Spatial Magic to coordinate their attacks.[22] While Team F is distracted by Leopold, Hamon strikes the crystal with multiple glass swords and is impressed with how skilled Finral is for a Black Bull. Leopold then destroys the crystal, and Team E is announced as the winners.

Afterwards Hamon offers his team a basket of sandwiches and suggests that they get to know each other better.[23] Hamon gladly shares one with Charmy Pappitson when she appears and asks for one.[6]

At the beginning of their second match, Hamon locates Team G's crystal just as Langris Vaude and Sekke Bronzazza find Team E. Once Finral confirms that he can defend against Langris's attacks, he sends Hamon and Leopold to the tower. The pair burst through the door and land in Fragil Tormenta's Miniature Garden of Illusory Snow.[24] Hamon manages to stay awake and watches as Leopold fights and defeats Fragil. However, Langris destroys Team E's crystal before Leopold destroys Team G's.[25]

During the eleventh match, Hamon listens as Asta criticizes Langris's views.[26] Later, when Asta collapses from exhaustion after the match, Magna catches him while Hamon and many other Knights take to the field in support of Asta.[27]

Several days after the exam, Hamon and the others selected to be Royal Knights all assemble in the Royal Capital and are placed under the command of Mereoleona Vermillion.[28] After everyone has changed into their new robes, Mereoleona introduces additional members and reveals the location of the Eye of the Midnight Sun's base.[29]

After the squad travels to the Gravito Rock Zone, Mereoleona explains the situation and divides the squad into teams. Yuno infiltrates the dungeon with Hamon, Klaus, and Mimosa.[30][31] When the team reaches the central room, they find a man suspended in a sphere of mana, and Hamon questions who the figure is.[32]

After Patolli activates the sephirot, Hamon begins to glow and is possessed by an elf spirit.[4] Later that night, all the remaining elves are exorcised after William Vangeance and Licht combine their magic to connect the elves to a giant tree through which Asta sends Anti Magic.[33]

Six months later, three Spade Kingdom mages attack the Golden Dawn base, and the Dark Disciple Foyal Migusteau defeats Hamon and several Golden Dawns in the base's courtyard.[35] After the battle, Hamon is discovered to have died.[36] 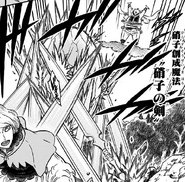