View source
watch 02:24
Wiki Targeted (Entertainment)
Do you like this video?
Play Sound

Halbet is a tall, slender woman with long, blonde hair.

Halbet wears a backless, sleeveless dress that has a middle split, leaving her abdomen and legs exposed. The dress is brown and has a black, fur-lined collar. Under the dress, she wears a pair of black, skin-tight shorts. She also wears a pair of black boots and black fur wristbands. A pair of multi-faceted, teardrop jewels hang from her ears, with a third one hanging from her dress's collar.

When using some of a devil's power, Halbet sprouts a pair of small horns from the top of her head and small, bat-like wings from her back.

Halbet is incredibly vain and obsessed with her own beauty.[3] To maintain the beauty of her hair and skin, she regularly administers injections of nutrients. Because of her strict beauty regimen, she believes eating food to be a foolish endeavor.[4]

After the Dark Triad takes over the Spade Kingdom, Halbet accepts power from them and becomes a Dark Disciple.[3]

Vanica Zogratis and her five Dark Disciples, including Halbet, are sent to the Heart Kingdom to defeat Princess Lolopechka and the other mages there.[5] The group infiltrates the kingdom and then splits apart, with each member attacking a separate location.[6]

Halbet defeats the Spirit Guardian Potrof on her own[2] and delights in the burning of the Polnfrume Forest. Charmy Pappitson attacks her for the forest's destruction, but Halbet's Hair Magic is able to defend against Charmy's Cotton Magic and to pass through the Black Bull's defense. After stabbing Charmy with spears of hair, Halbet mocks Charmy's obsession and over-indulgence with food and then encases Charmy in a coccon, attempting to constrict her to death. Charmy's wolf emerges and consumes the cocoon, freeing Charmy. Halbet is puzzled by Charmy's Magic. Halbet then evades the wolf's subsequent attacks, so Charmy uses natural mana arrays to enclose Halbet in an area where Charmy's Food Magic cooks Halbet and her hair. After eating Halbet's hair, the wolf sends the power to Charmy who punches Halbet repeatedly. Halbet loses consciousness as her face is left swollen and battered.[7]

Halbet stands back up as Vanica's curse on her heals her injuries and restores her hair. She is furious with Charmy, who refuses to back down.[8] Halbet's devil power is detonated after Vanica decides to kidnap Lolopechka and leave the Heart Kingdom. Halbet's body swells due to the building magic power before she becomes a massive explosion.[9] 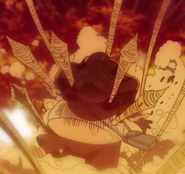