Hage 「ハージ Hāji」 is a village in the Forsaken region of the Clover Kingdom.[1]

Hage is a small village in the outskirt of the Clover Kingdom. It is mostly undeveloped with several houses randomly located within a wide grassy plain. One of the notable landmarks within Hage is the huge skeleton of a demon, which is located slightly outside of the village. A statue of the first Magic Emperor, who defeated the demon, was placed on top of the demon's skull. Additionally, the villagers are also able to gaze towards the Kingdom's Noble region unobstructed because of their lower altitude.[2]

Most of the villagers work as farmers where they have patches of land, which they cultivated for agricultural purposes.[2] As they live at the Forsaken region of the Kingdom, most of Hage's residents have low magical powers. Due to this, rarely any of them are able to join the Magic Knights and forced to remain in the village.[3] Furthermore, because they live far away from the Kingdom's main population, the villagers are often discriminated by those who live closer to the Royal Capital.[4] 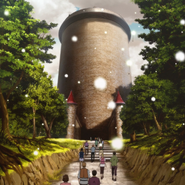 Retrieved from "https://blackclover.fandom.com/wiki/Hage?oldid=50751"
Community content is available under CC-BY-SA unless otherwise noted.