Gueldre is a tall and obese man. He was referred to as a fat ham by the other Magic Knight Captains. He wears a mask and his former uniform.

William Vangence jokingly asked how Gueldre managed to amass such a fortune, suggesting he has a great deal of commercial savvy, and he seems to have a deal of pride and confidence in it. However, this is called into question as, apparently, there are a great deal of unpleasant rumors abound about Gueldre, suggesting that he used unsavory methods to acquire that wealth. He is quite selfish, as he admitted that he placed himself first and avoided dangerous missions while aiming for the top. As these traits are opposite of what is desired in a captain, it is suggested that he used underhanded means to acquire his position. In his discussion with Revchi Salik, it is suggested that he also places a certain value on being respected, as he tells Revchi part of the reason he was blamed was that he was simply disliked by the other squadmates.

After becoming a Magic Knight, Gueldre uses his Permeation Magic to make deals and to gather information and power, working his way up to captain of the Purple Orca squad.[4] During this time, he sets up Revchi Salik to fail a mission and force him out of the squad.[5]

After defeating a foreign invasion, Gueldre returns to the Royal Capital with Julius Novachrono and other captains of the Magic Knights. They are welcomed with joy and cheers from the Noble Region's citizens.[6]

Sometime later, Gueldre accepts a deal with the Eye of the Midnight Sun to kidnap the mages in charge of the Royal Capital's barrier in exchange for rare magic tools.[9]

A few days after the fight near Nairn, the squad captains have a meeting in the Magic Knights headquarters. Gueldre criticizes Yami Sukehiro, Nozel Silva, Jack the Ripper, and Charlotte Roselei for failing to capture any of the Eye of the Midnight Sun members.[10] When William Vangeance shows up late, Gueldre questions how the Golden Dawn members develop so quickly, and William counters with a question about Gueldre's trading secrets. Yami then criticizes Gueldre's laugh and appearance.[11]

Marx Francois contacts the captains and tells them to assemble in the dungeon.[12] There they listen as Catherine and George reveal the traitor to be Gueldre. However, he denies that he would ever betray the Clover Kingdom. The other captains doubt his claim, so Gueldre questions the reliability of Marx's Mémoire Absolue. Yami tells Gueldre to calm down and let Marx read his mind, which worries Gueldre.[13]

Turning himself invisible, Gueldre tries to escape and creates Invisible Soldiers to keep the other captains busy, but Asta is able to sense his location with Ki and hits him with Demon-Slayer Sword, dispelling his invisibility. Angered at being bested by a commoner, Gueldre threatens Asta, and Rill Boismortier quickly restrains the Purple Orca in a painting.[14]

Julius then has Marx display Gueldre's memories and, after dismissing the other Magic Knights, has him continue questioning Gueldre.[15][16] The captain is later imprisoned in the dungeon.

Months later, Gueldre is freed due to destruction caused by the revived elves. He reunites with Revchi and they bond over their shared resentment for Asta.[17] Suddenly an elf breaks into the dungeon and prepares to kill the humans, so Gueldre and Revchi work together to take down the elf. Gueldre turns both of them invisible, and Revchi binds the elf with his chains.[18]

Gueldre and Revchi make their way into Clover Castle and see the Shadow Palace. Gueldre is conflicted on whether or not to go after the treasure within.[19] The pair sneak into the Shadow Palace and collect bags of treasure. Gueldre's magic hides them from Zagred's magic pouring down from the upper floors, but Gueldre worries that his magic will run out before they find the exit.[20]

After Zagred is defeated, Yami senses Gueldre's ki,[21] so he grabs the two Purple Orcas and drags them up to the topmost chamber.[22] After returning to Clover Castle, Gueldre watches as William, Licht, and Asta exorcise the remaining elves.[23]

A few days later, Gueldre is helping Revchi, Sally, Rades Spirito, and Valtos clean up the rubble in the Royal Capital. Gueldre and Revchi laugh at the newspaper article about Asta's trial until Jack threatens them.[24]

Days later, Julius decides to pardon Gueldre so the former Purple Orca can use his business skills to help finance the rebuilding effort of the Clover Kingdom.[25] 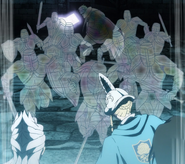