Gordon Agrippa 「ゴードン・アグリッパ Gōdon Agurippa」[1] is a commoner of the Agrippa Family[2] and a 1st Class Junior Magic Knight of the Clover Kingdom's Black Bull squad.[3][4]

After temporarily becoming an otaku, Gordon wears a short denim jacket with torn-off sleeves, a sleeveless shirt with "I♥マナ" ("I ♥ mana") printed on the front, a pair of jeans, a pair of glasses with swirly lenses, and a bandana wrapped around his head.[5] 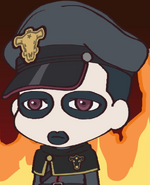 Gordon is constantly mumbling to himself[3][6] and dislikes being in the sun.[7] His quiet mumbling makes it extremely difficult for him to communicate with anyone, and coupled with his appearance, often intimidates the people around him. This leaves him in a near-perpetual state of loneliness, and he is even easily forgotten among his squad.

Gordon keeps a very long series of diaries detailing his day-to-day life and experiences, with many of the pages filled with his own written observations of others, scribbles of the Black Bull members, and reminders of his friends.

Gordon was born into the Agrippa Family, a commoner family infamous for their Curse Magic. He grows up lonely and unable to make friends due to his magic and appearance. After receiving his grimoire, Gordon abandons his family and joins the Black Bull squad of the Magic Knights. Over the years, he comes to view them as friends.[8]

Gordon accompanies Yami Sukehiro and Finral Roulacase to the Magic Knights Entrance Exam that Asta is taking.[3] After the exam is finished, Gordon heads back to the Black Bulls base with Yami, Finral, and Asta.[9] When they arrive back to their headquarters, Gordon watches along with the rest of the Black Bulls as Asta takes the Black Bull Initiation Ceremony.[10]

Gordon does not accompany the Black Bulls to Raque because he dislikes the sun.[7] However, he later sulks in the corner after the squad returns because he was left out of the mission to the Seabed Temple.[11]

Later, in search of a cure for Asta's cursed broken arms, Gordon reaches out to his family for information, but they refuse to help.[12] Instead, Gordon and Gauche Adlai research curses in the royal library.[6] However, they return unsuccessful and transformed into otakus. Asta reveals that his arms are healed, and Gauche and Gordon threaten to re-curse his arms.[13] Afterwards, Gordon is invited to the Star Awards Festival but is too nervous to go.[14]

Weeks later, Gordon tries to socialize with Gauche Adlai and Grey. However, they are interrupted when Rades Spirito, Sally, Valtos, and an army of corpses attack the Black Bulls base.[15] When Sally enhances one of the corpses, Gordon destroys it with poison badgers.[16] Rades summons No.0 - Michael Caesal and easily defeats the Black Bulls, but Gordon refuses to give up after reflecting on what the squad and base mean to him.[17]

The other Black Bulls are shocked when Henry Legolant appears from the base,[18] and Gordon senses that Henry is human, to the puzzlement of the others. After failing to hit Henry, Rades tries to attack the other three, but Henry moves part of the base into the path of the attack, defending his squadmates. Henry introduces himself and promises to hurt those who hurt his friends. The other Black Bulls are shocked to see the base rearrange into a giant bull[19] and how recklessly it fights.[20]

When Sally manages to topple the base, the other Black Bulls come to Henry's defense, with Grey transmuting the Gel Magic into Plant Magic, which makes Gordon's Poison Magic more effective. Rades tries to take advantage of their distraction, but Henry defends them and defeats Michael Caesar.[21] As the Black Bulls celebrate their victory, Valtos reappears and then disappears with the other Eye of the Midnight Sun members. Afterwards, Gordon breathes a sigh of relief and mumbles about Henry being his new friend.[22]

After being saved from the Arrows of Judgment, Gordon and the other Black Bulls notice light coming from the horizon. Suddenly Gauche begins glowing[23] and is possessed by Drowa, who turns on Gauche's squadmates.[24] After they are defeated, the elf leaves.[25] Later, some other Black Bulls return to the base and find Gordon, Grey, and Henry sitting among the rubble.[26] When Charmy returns and finds her garden destroyed, she feeds her squadmates with Sheep Cook: Master Chef's food, which restores their magic power. Once the base reassembles, the Black Bulls head out to protect the kingdom.[27]

When they reach Hecairo, Gordon fires off Verbotenes Obst through one of the base's cannons, and Henry amplifies the strength and directs it at the possessed Coral Peacock.[28] After Asta exorcises the elves, the Black Bulls' celebration is interrupted by Rades, Sally, and Valtos.[29] Gordon informs Asta that the three attacked the base earlier.[30] Once all three are convinced to help save the kingdom, Valtos teleports the base to the capital.[31]

When they see a group of elves attacking from the floating dungeon, the base is warped inside Clover Castle.[32] Gordon lends his Poison Magic to one of the cannons again, and the amplified shot strikes the possessed Nils Ragus.[33] In retaliation, Reve pulls part of the base into her Glamour World while Drowa and Patolli combine spells to break apart the rest of the base.[34]

As Gordon, Grey, Henry, Asta, Rades, and Valtos fall, Gordon creates a large cloud of poison which Grey transmutes into cotton, cushioning their fall. Yami orders the Black Bulls to handle the elves as he heads into the Shadow Palace. However, before the Black Bulls can act, Drowa and Eclat immobilize them all.[35] Asta's Demon-Destroyer Sword frees him, Gordon, Grey, and Henry from the enchantment, and Gordon refracts one of Drowa's attack with his poison.[36] When Asta is reflected up into the air, Gordon helps lift a section of the base around Asta, allowing him time to enter his black form.[37] Following Asta to the top of the dungeon, Gordon and Grey ride atop Henry's mini base and protect an immobilized Asta with a mirrored curtain of transmuted poison.[38]

Drowa creates a mirror ball to scatter light and distract Asta's black form and then tries to catch them all with a large reflection of Eclat's eye, so Henry has them cram into the base and Grey transmutes the outside into mirrors. Before Drowa can destroy the mini base, Henry jettisons the other three and then throws himself at the elves.[39] Gordon covers Drowa's mirror ball with poison so that Asta's black form will be drawn to the elves.[40] After Asta strikes the elves with his Demon-Destroyer Sword, Gordon watches as the boy exorcises the elf spirits.[41]

Gordon and Grey lean over Gauche, which startles him when he wakes. Gauche eventually drops his aloof nature and thanks everyone for saving him and his sister. Gordon, Grey, and Asta tackle him in a hug. Suddenly, the other Black Bulls drop from above and land in a pile of cotton. With the Black Bulls reunited—except Finral, they prepare to follow after Yami into the Shadow Palace.[42]

While the group is recovering their strength, they are attacked by two elves, but Fuegoleon and Mereoleona Vermillion arrive and defeat the elves.[43] The gate to the Shadow Palace is shrinking and more possessed Golden Dawns attack, so the Black Bulls and Kirsch Vermillion remain to hold them off while the captains, Asta, Noelle Silva, and Mimosa Vermillion fly to the gate.[44] Shortly after, Yuno and a group of Magic Knights arrive in the castle and defeat the elves. Gordon watches as Yuno's pendant reopens the gate to the Shadow Palace and as Yuno and Charmy fly into it.[45]

A few days later, the Black Bulls barge into the Magic Parliament Courthouse to rescue Asta and Secre.[46] Damnatio Kira shrinks their spells, but Asta uses the Demon-Destroyer Sword's ability to remove the effect. Nozel and Fuegoleon then interrupt the fight and pass on a mission from Julius: the Black Bulls will be exiled while the squad investigates devils and monitors Asta and Secre.[47]

Gordon, along with Grey, Gauche, and Asta, returns to his family home. After dinner, Gordon asks his father to teach them about devils and curses. Nathan shows them his workshop, which horrifies them, but he reveals that he has been using his research to create treatments and cures, which surprises Gordon. Nathan then creates a map that shows the locations of curses throughout the kingdom, and they notice a particularly powerful one in the Heart Kingdom.[48] Gordon stays to continue studying Curse Magic while the other Black Bulls return to their base.[49] 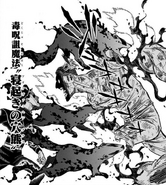