Gifso is an old, wrinkled man with long, thin eyebrows and mustache that extend outwards. He has a long beard that extends below his waist and extremely long hair that for some reason is able to levitate.

He wears a large coat with a large collar and a black trim. Under the coat he wears light-colored shirt and pants and a dark-colored belt.

Gifso is very fond of games and telling jokes, he also seems to be a bit perverted. Also he shows great concern and pride towards his family.

When the Black Bulls enter the Seabed Temple, Gifso attacks them with a Monster Toy, but it is quickly defeated by Magna Swing, Gauche Adlai, and Luck Voltia. Impressed, Gifso then introduces himself as the high priest and asks them to play a game for the magic stone.[3] He jokes that it is a breast-rubbing game and approaches Noelle Silva and Vanessa Enoteca, but Noelle punches him and threatens to teach him what jokes are appropriate. Magna asks how Gifso knows about their mission, and the priest says that his eyesight is special. He also offers women, alcohol, and food to further persuade the Black Bulls. Yami Sukehiro accepts the challenge, and Gifso pulls out his grimoire and summons the other priests. Once everyone is gathered, he uses his magic to separate everyone to different parts of the cave system within the temple.[4]

However, Gifso and Yami are transported together because the captain is too powerful to compete and so they can watch the matches.[5] Gifso boasts that his priests would be middle to upper ranked Magic Knights, and is surprised when four are so easily defeated.[6][7]

When Finral Roulacase complains that he cannot escape the temple with his Spatial Magic, Gifso explains that he cannot leave until the Temple Battle Royale is over, and creates another Monster Toy to chase Finral. Yami suggests a more vicious-looking fish, causing Gifso to wonder on whose side he is really. Watching Charmy Pappitson catch and prepare fish, Gifso questions what she is doing and laughs when she is easily put to sleep by Kahono.[8] When the score drops to 8:4 in the Black Bulls' favor, Gifso becomes frustrated that he was duped by their low ranks, but is counting on his son and grandchildren to make a comeback.[9]

He is taken by surprise when Vetto crashes into the temple[10] and takes out Gio so quickly and easily. Yami asks to be allowed to confront Vetto, which worries Gifso, but the priest states that is impossible due to the rules of his magic. When Yami tries to cut his way out of the room, they discover that an Eye of the Midnight Sun member has trapped them with Spatial Magic.[11] Sensing Yami's presence, Vetto threatens to kill everyone before confronting the captain, which scares Gifso. Yami tells his subordinates about the situation and to surpass their limits, and Gifso announces a change in the game's rules: defeat the Eye of the Midnight Sun members.[12]

Gifso marvels that Magna and Luck's combined magic did nothing to Vetto.[13] When Kiato and Kahono combine their magic to take on Vetto, Gifso cheers them on.[14] However, Vetto proves too much, taking Kiato's leg and crushing Kahono's throat, and in desperate anger to protect his granddaughter, Gifso summons two Monster Toys, but they are easily destroyed. Vetto comments that he too has dreams and bonds but they were crushed, but Gifso does not understand.[15]

When Noelle releases her mana and threatens Vetto, Gifso notes that her power is causing the temple to shake.[16] After she blasts a hole through Vetto and part of the temple, Gifso claims she must be a sea goddess.[17] After he falls into despair and opens his third eye, Vetto uses Demon Beast Magic to regrow his entire right arm, which Gifso says is impossible to do with Healing Magic.[18]

After Asta, Finral, and Vanessa defeat Vetto, Yami develops a spell to cut through the spell trapping him and knocks out the Eye of the Midnight Sun member, and Gifso confirms to himself that Yami was indeed too strong to allow in the game, and rides off to aid Kiato and Kahono.[19] Gifso embraces his grandchildren and blames himself for their injuries because of his game. Grateful for the Black Bulls' aid and recognizing that they won, he offers them anything that they wish. Yami claims only the magic stone that Nero brought, and Gifso reveals that he did not actually know what the magic stone was.[20]

After the Black Bulls recover, the temple's residents gather together to bid them farewell, and Gifso invites the squad back anytime for a party.[21] 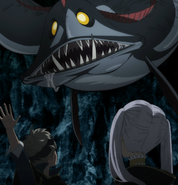 Temple Shuffle
Add a photo to this gallery

Gifso's grimoire
Add a photo to this gallery

Retrieved from "https://blackclover.fandom.com/wiki/Gifso?oldid=81314"
Community content is available under CC-BY-SA unless otherwise noted.