George 「ゲオルグ Georugu」[1] is a rogue mage and a member of the Eye of the Midnight Sun.[2]

George has blond hair styled in an asymmetric cut. He also has a scar on the left side of his face.

George wears a white, hooded cloak, with black covering half the shoulders and down the middle. The cloak has three vertical eyes on the chest with sphere on the sides of each eye and on top of the highest eye. The design also has a line on the bottom most eye that makes it look like a key.

George is a calm person who mostly remains calm even in a dire situation. George is also loyal to Licht and even tells his captors he will never betray him.

As Valtos and Rades Spirito are having problems with Asta and his group, George and other members of Eye of the Midnight Sun show up to assist them, and soon after that, they retreat when the other Magic Knights return.[2] Back in the hideout, they meet Julius Novachrono, who quickly kills two of their members and manages to restrain the rest.[3] Licht arrives and rescues all except George, who is brought back to the capital by Julius to interrogate him.[4]

As George and Catherine are restrained, Marx Francois, the Magic Emperor's aide, tries to extract information forcefully from their heads. However, the aide's attempts result in failure, due to a protect magic spell cast on them. Subsequently, Catherine declares that she would not give them any information, even if she were not being protected by said spell, followed by George stating that while everyone abandoned them, their master did not, thus they would never betray him.[5]

Days later, George is still imprisoned along with Catherine when Asta is brought to them to release the spell protecting their minds. When Asta releases the spell on his mind, George is put under Marx's spell and forced to answer question.[6] When the captains of the Magic Knights are summoned before them and Julius asks who is the traitor among them, George along with Catherine reveal that the captain of the Purple Orca Gueldre Poizot is the traitor.[7][8]

Months later, after Patolli places the last magic stone in the sephirot, the Eye of the Midnight Sun members are all sacrificed. Their bodies burn up as their mana and souls are extracted.[9][10] 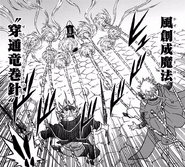