After the Crimson Lion squad places fifth in the squad rankings, Gareth and the others are berated by their new captain, Mereoleona Vermillion, and she forces the squad to undergo training at the Ultime-Volcano Mountain Trail.[2][3] Along the way up the volcano, Gareth and the others encounter a magical lifeform made of lava, which Asta suddenly and quickly dispatches.[4]

At the Royal Knights Selection Exam, Gareth is placed on Team H with Simon and Medio.[5] During their first match, Gareth protects his team's crystal with a large iron defense spell, but it is no match against Langris Vaude's Spatial Magic, which carves through both the defense and crystal, winning the match for Team G.[6]

Several days later at the Crimson Lion base, the vice-captain Randall Luftair is possessed by an elf spirit and attacks the other Crimson Lions. Leopold refuses to back down and rallies the others.[7] Gareth and three other Senior Magic Knights attack the elf together but are quickly defeated. Gareth's Iron Bullet misses and his iron defense is crushed.[8] Gareth and two others stand back up and plan to give Leopold the opportunity to retreat with the other injured members. Leopold refuses but his body gives out. While the Knights are distracted, the elf knocks them aside. Gareth watches helplessly as the elf prepares to kill Leopold.[9] Suddenly the base is engulfed in flames, and Fuegoleon Vermillion emerges from the base, to the surprise and relief of Gareth.[10] After Fuegoleon defeats and restrains the elf, Gareth and the others cheer their former captain.[11] 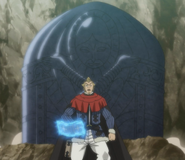