Fragil is a woman with black hair and wears a fuzzy white hat.

While possessed by an elf spirit, a tattoo appears on Fragil's forehead and her ears become pointed.[4] 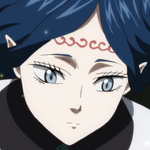 Fragil possessed by an elf

At the Royal Knights Selection Exam, Fragil is placed on Team G with Langris Vaude and Sekke Bronzazza.[6] As their first match begins, Fragil notices Sekke panicking and asks if he is okay and if he is strong like the Black Bulls. Smiling and winking at her, he tries to play it off.[5] Team G wins easily.[7]

During her second match, Fragil hides herself in a tower with her team's crystal. When Leopold Vermillion and Hamon Caseus burst through the door, her Miniature Garden of Illusory Snow forces them to sleep, but Leopold resists the enchantment. Surprised that he is still awake, Fragil barely dodges Leopold's Spiral Flame, which damages part of the crystal.[8] Fragil defends her team's crystal but fails, and Leopold destroys it. However, Team G wins because Langris destroyed Team E's crystal first, much to Fragil's relief.[9]

Afterwards, Langris challenges Asta, so Julius Novachrono has Teams B and G reassemble on the battlefield, which confuses Fragil.[10] She asks Langris for clarification, but he silences her and tells her and Sekke that he alone will handle the fight.[11] Asta later defeats Langris and destroys the crystal with Black Meteorite.[12] At the same time, Team B's crystal shatters, ending the match in a draw. Zora Ideale criticizes Fragil for being scared and only watching the match.[13]

Several days after the exam, Fragil is chosen to join the Royal Knights and assembles with the others in the Royal Capital.[14] While waiting in line to change her robes, Fragil is concerned when Rill Boismortier keeps spacing out.[15] After everyone has changed, Mereoleona introduces additional members and reveals the location of the Eye of the Midnight Sun's base.[16]

After the squad travels to the Gravito Rock Zone, Mereoleona explains the situation and divides the squad into teams. Rill infiltrates the dungeon with Fragil, Puli Angel, and Ruben Chagar.[17] As light shines out from the dungeon, Fragil and her team begin glowing themselves.[18] They are all possessed by elf spirits and follow Lira after he crashes through the floor.[4]

Retrieved from "https://blackclover.fandom.com/wiki/Fragil_Tormenta?oldid=53867"
Community content is available under CC-BY-SA unless otherwise noted.