Fanzell Kruger 「ファンゼル・クルーガー Fanzeru Kurūgā」[1] is a former Commander of the Diamond Kingdom's army. After fleeing the kingdom, he now lives together with his wife, Dominante Code, and students, Mariella[2] and Fana.[3]

Fanzell is a man of average height with a slim figure and well-defined muscle tone. He has medium length messy red hair, blue eyes and a stubbled beard.

Fanzell seems to be an easy going man with a habit of being undressed in front of people.[4] He is also caring of his comrades, shown when he offers to help aid Asta to the Witches' Forest despite Dominante's warning of it being dangerous, stating that he could not just leave his student like that.[5]

Fanzell rises to the rank of Commander in the Diamond Kingdom's army[2] and an instructor in the magic training facilities, where he teaches Ladros, Mars, Fana,[6] and Mariella.

Disgusted by the kingdom's methods, he flees with his wife Dominante Code to the Clover Kingdom but they end up separated. He meets and trains Asta outside of Hage. Mariella is sent to bring Fanzell back but fails. Months later, Fanzell seeks the help of the Black Bulls, and they protect him from another attack from the Diamond Kingdom. Meanwhile, Fanzell tracks down Dominante in Kikka's black market. Fanzell, Dominante, and Mariella then move into a house hidden in the woods.[7][8]

Months later, Noelle Silva and Finral Roulacase stop by the house to visit, and Fanzell answers the door naked. After listening to what happened to Asta, Fanzell decides to help find a cure for Asta's arms. Dominante suggests that they ask the Witch Queen, so they all head back to the Black Bull base through Finral's portal, pick up Asta, and head to the Witches' Forest.[9] To sneak into the forest, they hide under invisibility cloaks, but because of the limited number, Fanzell flies with Finral and Asta on his lap. A branch accidentally catches on the cloak and Fanzell's clothes and pulls them off. The Security Golems sense the intruders' presence and chase them. The group flies toward and crashes into the Queen's throneroom.[10]

When the Queen notices that two armies are approaching, Fanzell recognizes that Mars is leading one of the armies.[11] Fanzell and the others offer to help if the Queen cures Asta's arms. Fanzell is delighted when the Queen accepts and heals Asta's arms.[12] Fanzell says that he, Dominante, and Mariella will face the Diamond Kingdom's army since they have some history with Mars. Asta accepts their help and adds that Fanzell should put on some clothes.[13]

Fanzell flies out to confront the Diamond Kingdom's army directly. Ladros wonders who the guy is and if he is a fool for standing against their army. Fanzell calls out to Mars, asking if he recognizes him. The general remembers that Fanzell is the one who taught them. Ladros says that he can have some fun with his old teacher and fires a spell. Fanzell easily counters the spell and comments about how the two are not like how they used to be. Fanzell also says that he will have to fix his past with his magic and releases his mana.[14] Fanzell asks Mars and Ladros to leave, but Ladros counters that they are the one who should be asking that. Ladros informs Fanzell that their king is dying and that they are here to get the Witch Queen's secret to longevity. Ladros also reminds Fanzell of the Diamond Kingdom's motto, and Fanzell replies that he could not stand living a life that way and left.[15]

Fanzell charges toward them but instead of attacking them, he passes them and attacks their subordinates. His Wintry Wind spell easily counters the subordinates' spells. The mages continue to attack Fanzell but he easily defeats them. Fanzell looks back at Mars and Ladros and thinks about how they cannot attack him because of the mages and that he will have to face them soon. As the Diamond soldiers try to reform their ranks, Mariella and the witches attack from the forest below. Fanzell also flies around knocks the soldiers down into the trees, where they are ambushed by more witches and Dominante's exploding Security Golems.[16]

When Ladros decides to join in the fight, Fanzell, who anticipated Ladros's eagerness, is ready to restrain the general with his Whirlwind spell. Fanzell asks Ladros to retreat again but Ladros counters that he wants to kill everyone he sees, a mindset that Fanzell taught to him. Fanzell slashes his wind sword across Ladros[17] and prepares to follow it up with a stronger attack due to Ladros's Reinforcement Magic. However, Mars drops into the forest and calls for the fight to stop. Fanzell whips his sword and his Mountain Retreat spell knocks back Mars. Fanzell then pours his magic power into a singular thrust into Ladros's torso. Ladros pretends to scream in pain as he absorbs the magic. Shocked, Fanzell backs off and notices that Ladros does not even have a scratch.[18] Ladros releases his mana, and Fanzell feels multiple magic powers swelling up together. When Ladros threatens to target everyone on the battlefield, Fanzell rushes off to protect Dominante. Ladros's Million Lasers destroy the surrounding area, and Fanzell manages to reach Dominante in time to defend her with Wind Magic, leaving himself open to being hit. Ladros finds the pair and kicks Fanzell aside before picking up Dominante. Fanzell asks Ladros to stop since he needs to use his power for good, but Ladros refuses and calls Fanzell a coward, for which Dominante attacks him.

Fanzell watches helplessly as Ladros throws Domina into the air and prepares to shoot her; however, Mars blocks the blast with Laevateinn, catches Dominante, and stands between Fanzell and Ladros, much to Fanzell's surprise and confusion.[19] When Mariella's ambush on Ladros fails, Mars knocks Ladros away and creates a crystal platform to carry the three deserters as they flee from Ladros's lasers. Mars also casts his Phoenix Feathers Robe spell on the deserters to heal their injuries. Fanzell questions why Mars is helping them, and Mars offers to explain after they stop Ladros. Mars mentions that large magic power and Anti Magic are possible counters to Ladros, so Fanzell decides that they should lead Ladros to the other side of the forest where Asta is. After Domina and Mariella are sent to safety, Fanzell and Mars hide in a tree and then ambush Ladros, launching him with a combined, magically reinforced strike.[20] As the pair near the other battlefield, Fanzell is surprised by Salamander's power and reconsiders their plan. He yells for Asta to knock Salamander's fireball toward him. Fanzell then uses his Wind Magic to knock aside himself and Mars and to guide the fireball toward Ladros, who is overwhelmed by the spirit's magic.[21] As Ladros falls from the sky, Fanzell notes that the general's magic power has disappeared.

Fanzell compliments Asta's strength and promises to explain why he is working with Mars. The three turn their attention to Salamander, and Mars is shocked when he recognizes Fana.[22] Fanzell recalls hearing that she died during [Moris Libardirt]'s experiments, and wonders what sort of magical hold the Eye of the Midnight Sun has over her. In her fury, Fana prepares to self-destruct and wildly launches fireballs at her opponents. Mars refuses to defend himself, which earns him yelling from Fanzell and Asta. As he watches Asta convince Mars to save Fana, Fanzell reflects that Asta convinced him in a similar fashion.[23] Fanzell watches Mars and Asta charge toward Fana and admires their abilities to withstand the Fire Magic.[24] Fanzell tries to get Finral, Noelle, and Vanessa to evacuate, but they refuse to move because of their faith in Asta.[25] After Asta neutralizes the self-destructive magic and Mars reminds Fana of who she is, Fanzell hugs Mars and Fana out of happiness that they both survived.[26]

Fana tells the group of what she can remember. At the mention of a magic stone in the forest, Noelle wants them to go tell the Queen, but Fanzell wants them to gather Domina, Mariella, and the injured witches and to check on Ladros. Suddenly, Fanzell senses Ladros's magic as a barrage of lasers crash down on the group. Fanzell yells for everyone to run, but the lasers strike them, knocking them all to the ground. To Fanzell's disbelief, Ladros emerges from the forest and explains how he survived the fireball.[27] Fanzell watches helplessly as Asta is the only one still standing to fight Ladros.[28] After Ladros holds Fana hostage and forces her to release Salamander, Fanzell watches in disbelief as Ladros successfully absorbs the spirit.[29]

After Asta defeats Ladros, the Witch Queen arrives and takes everyone captive.[30] Vanessa Enoteca defeats the Queen, freeing everyone.[31]

Fanzell, Dominante, and Mariella decide to take Fana to live with them, and Fanzell bids farewell to Mars and Ladros. Fanzell tears up when Asta and Mars promise to help each other.[32] 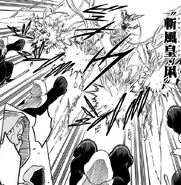 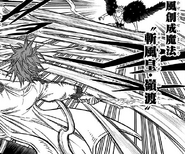 Slicing Wind Emperor: Gale
Add a photo to this gallery

Slicing Wind Emperor: Whirlwind
Add a photo to this gallery 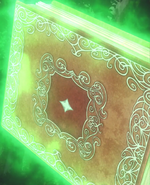 Fanzell's grimoire
Add a photo to this gallery

Mariella is an assassin sent to bring back Fanzell after he fled the Diamond Kingdom, but after Asta convinces her to change her way of living, she has now returned to being Fanzell's student.[7]

Asta helps Fanzell when he fled from the Diamond Kingdom and has learned swordsmanship from him.[7]

Retrieved from "https://blackclover.fandom.com/wiki/Fanzell_Kruger?oldid=81295"
Community content is available under CC-BY-SA unless otherwise noted.