For the human from the Diamond Kingdom, see Fana.

Fana 「ファナ」[2] is an elf[4] and one of the ten Apostles of Sephirah.[5] She is reincarnated in the human Fana as a member of the Eye of the Midnight Sun's Third Eye.[6] After her defeat in the Witches' Forest, she is reincarnated again in an artificial body.[7]

As an adult elf centuries ago, Fana is a short woman with long, light pink colored hair that is parted down the middle and each side is gathered and tied off at the tips, forming two ponytails that rest on her shoulders.

Fana wears a light-colored dress that extends down to her knees. The dress is held together by a dark-colored belt, from which hangs a pouch for her grimoire on her right. Around her head sits a floral crown. She also wears a pair of dark-colored, short-heeled sandals that lace up to her mid-shin.

Her artificial body is only matured to the age of 15 years. Her hair is longer and her ears are pointed. The tattoo on her forehead has three dots where her third eye was, and according to Rhya, her breasts are larger than they were when she was the same age in her original body.[7] Once the Reincarnation Magic is removed, her tattoos disappear.[8] Six months later, her original tattoo is back.[9] 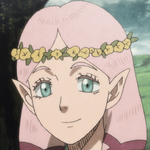 Fana as an adult centuries ago

Fana as depicted in the flashbacks was shown to be a kind hearted and good natured elf, happily supporting Licht and Tetia wedding and congratulating Tetia being with child, showing that she was originally supportive of Licht and Lemiel Silvamillion Clover's ideals of racial equality between the humans of the Clover Kingdom and the Elf Tribe, implying that she was truly peaceful and trusting towards the young prince. This, however, changed upon his "betrayal". During the elf massacre by the human royals, Fana swore eternal vengeance and hatred towards them, and upon being revived and put under the effects of the incomplete Reincarnation Magic, this hatred was increased even further, making her short tempered, violent, and slightly unstable as seen when she tried to incinerate anyone that she deemed worthy of her hatred with minimal provocation. Despite this, she still maintained a strong attachment and love for her fellow elves, calmly saying that anyone that hurts them in anyway deserved to be burned to death by her, as seen with her outrage at Licht being hurt and her trying to avenge Vetto when he was killed by the Black Bulls. Later upon her Second Reincarnation into an artificial body, Fana's personality seems to have become much more stable and closer to her original personality, due to no longer being under the effects of the incomplete reincarnation and the Evil Eye, with her noting that her mind was now much clearer and less foggy.

Fana and some of the other elves enjoy a meal the day before Licht and Tetia's marriage.[10] After the wedding, the human royals enact the Massacre of the Elf Tribe. As she dies, Fana vows never to forgive them.[11]

Five centuries later, Patolli reincarnates Fana into the body of a Diamond Kingdom orphan also named Fana, and makes her one of the Eye of the Midnight Sun's Third Eye, with Rhya and Vetto.[12][13]

Years later, the Third Eye travel to the caves outside Nairn in order to rescue Patolli. Fana casts Phoenix Feathers Robe on him, healing the damage he took from his reflected attack. He asks for his allies' forgiveness, to which she declares that she hates whoever did this to him. He introduces the trio and says that their powers are greater than his. When Finral Roulacase calls their strength a bluff,[14] Fana proves it by attacking Yami Sukehiro with Salamander's Breath. The Third Eye's stream of attacks force Yami to focus on defending his team, and with the captain overwhelmed, the trio attack simultaneously. However, their attacks are countered by the arrival of three captains: Jack the Ripper, Nozel Silva, and Charlotte Roselei.[15]

When Nozel decides to attack Patolli, Fana counters Nozel's attack and decides to battle him.[16] During the battle Fana is shocked along with everyone else when Asta suddenly lands a blow on Patolli.[17] When Patolli's mana starts to erupt, the Third Eye quickly move to seal Patolli's mana. Fana then retreats along with Vetto, Rhya, and Valtos.[18]

Riding atop a grown Salamander, Fana leads the Eye of the Midnight Sun's forces in an assault on the Witches' Forest, while Mars and Ladros lead the Diamond Kingdom's forces and attack the forest from the opposite side.[20] Fana asks if Asta is within as she plans to kill him and recover the magic stone, which one of her subordinates affirms and adds that Witch Queen is there, too. Fana has Salamander launch a fireball, which causes a large explosion and engulfs the forest in flames.[21] A large Security Golem rises from the forest and attacks, but Salamander easily destroys it, shocking the witches, who are then captured by the Eye of the Midnight Sun.[22]

Fana remembers some events leading up to the humans massacring the elves. As her rage grows, the gem on her forehead crumbles and reveals a third eye. Several large crystals erupt from Fana and knock Asta back, and her overflowing demonic magic increases Salamander's size and power and manifests a number of large floating crystals.[26] Fana dives at them, and the heat rising from Salamander's body knocks them back. When Fana attacks again, Noelle Silva protects her friends with Sea Dragon's Cradle. However, Salamander causes the water boil with just contact and destroys it with an attack, forcing the Black Bulls to retreat on makeshift brooms.[27] Fana and Salamander appear above them and attack, but Noelle counters with Sea Dragon's Roar. Fana defends by enlarging one of the clumps of crystals, and although the water spell tears through it, the crystals provide Fana time to dodge. However, with a wave of her wand, Noelle turns the water dragon around, slamming Fana and Salamander from behind and dealing heavy damage to both.[28]

Calling out to her, Mars rushes towards his old friend, but Asta holds him back. Fana becomes more distressed and claims not to know him. As her anger and confusion grow, Fana declares that she will make everything disappear, and unleashes her mana and combines it with Salamander, creating a self-destructive sphere. She releases several fireballs, one of which Asta nullifies and another Mars takes head on.[33] Mars and Asta charge Fana, who tells them to stay away and fires on them again, but they continue forward, countering her spells. As they get closer, the heat coming off of Fana's magic burns them, but Mars uses Phoenix Feathers Robe on himself and Asta to stave off the damage.[34] When they reach the sphere of man, Fana announces that it is the end, but Asta refutes this and swings his Demon-Slayer Sword, slicing through and destroying the sphere of mana.[35]

Fana releases her mana again and says that their hatred will never disappear. Mars dashes forward and embraces her, asking for her forgiveness. Her human host remembers the time she spent with Mars. Suddenly her raging mana disappears and the third eye crumbles as the elf's spirit loses control and disappears.[36]

Months later, after Patolli sets the last magic stone in the sephirot, Fana and Vetto are reincarnated into artificial bodies developed by Sally. Rhya greets them and explains the situation.[37] Fana and Vetto put on clothes before joining the other Apostles of Sephirah atop the floating dungeon. They greet Patolli when he arrives and with all of the apostles assembled, they summon the Shadow Palace.[38] Afterward, Fana and most of the elves fly through the gate.[39]

Fana is waiting for the final magic stone to arrive[40] when Noelle lands in her room.[41] During their fight, a Sea Dragon's Roar destroys Fana from the waist up, but Fana's phoenix-like magic regenerates her body.[42] Fana allows Noelle's lance to pierce her stomach, planning to incinerate the girl, but Jack interrupts and slashes Fana.[43]

Licht later draws on Fana's magic to help power a spell to destroy the devil.[44] The devil survives and floods the Shadow Palace with more of its magic, and Fana realizes that she needs to stop fighting. While distracted avoiding a slash from Jack, Fana is almost swallowed by the devil's magic. Nozel uses a strand of mercury to push her out of harm's way.[45] Licht and Lemiel Silvamillion Clover send out protective auras to the elves.[46] After the devil is defeated, the magic does not disappear, and Fana leads the Magic Knights to the topmost chamber where the exit is.[47] When Lemiel's magic gives out and the protective light disappears, Valtos saves the elves and Magic Knights with his Spatial Magic.[48]

The elves and humans return to Clover Castle. All the remaining elves are exorcised after William Vangeance and Licht combine their magic to connect the elves to a giant tree through which Asta sends Anti Magic. Fana, Rhya, and Vetto, however, remain bound to their bodies and bid farewell to Licht and the others.[49] Rades Spirito refuses to let Patolli pass on and resurrects the elf in Licht's artificial body.[50]

Some time later, Patolli, Rhya, Fana, and Vetto discover the secluded village, Elysia, and stay there to protect Licht and Tetia's descendants.

Six months after the elves' attack on the Clover Kingdom, Dryad sends Fana, Patolli, Rhya, and Vetto to the Heart Kingdom while Vanica Zogratis and her Dark Disciples are attacking the kingdom. Arriving after the Disciples have exploded,[51] the elves find Noelle and the other Magic Knights and bring them back to Elysia.[9] 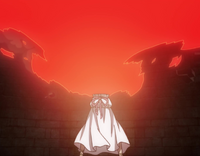 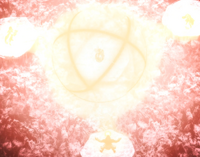 Retrieved from "https://blackclover.fandom.com/wiki/Fana_(elf)?oldid=71485"
Community content is available under CC-BY-SA unless otherwise noted.