Fana 「ファナ」 is a rogue mage from the Diamond Kingdom[2] and a former member of the Eye of the Midnight Sun's Third Eye.[3][4]

She wears a high collared, furry black dress beneath the standard light hooded robe of her group, with open-toed, knee-high boots.

Though she is outwardly the most quiet of the group, her placid exterior belies an unstable, hateful personality. Seemingly gentle initially, she is extremely quick to declare her hatred toward anyone that upsets her. When angered, she is the most ruthless member of the group and will mercilessly slaughter anyone she has deemed worthy of her hatred. Like the others in her group, she is incredibly devoted to Patri, caring so much for him that she instantly decides she hates anyone who hurts him. She halts her battle to come to his aid when his seal is released while battling Asta.

After becoming an orphan,[5] Fana is chosen to be a participant in the Diamond Kingdom's experiments to enhance their mages' magical power.[6] During this period, Fana meets a fellow participant, Mars, whom she tells that the experiment is performed for a good cause,[7] and they are instructed by Fanzell Kruger.[8]

Throughout the experiment, Fana and Mars form a bond where they promise to explore the world together, once they are free to go outside. However, the last experiment forces every participant to kill each other with a single mage being allowed to leave. They then begin to kill one another, and Fana ultimately attacks Mars as well. Fana's assault forces Mars into a corner as he lands a lethal blow on her, which completely fills him with rage and remorse.[9] To his surprise, as she is about to give out her last breath, Fana reveals her true intention behind her assault. While healing all of Mars' injuries, Fana asks him to go outside and explore the world for her as well.[10]

After the trial, she revives thanks to her phoenix-like powers. Intrigued, Morris experiments on her, embedding magic stones on her and piecing together her grimoire with Mars'; however, Morris eventually abandons her. Some time later, Patri approaches her and has the elf Fana possess her body.[11][12]

Rhya, Vetto, and Fana appear via Spatial Magic after Patri falls to his reflected attack, and she casts Phoenix Feathers Robe on him. He asks for his allies' forgiveness, to which she declares that she hates whoever did this to him. He introduces the trio as the Eye of the Midnight Sun's Third Eye and says that their powers are greater than his. When Finral Roulacase calls their strength a bluff,[13] Fana proves it by attacking Yami Sukehiro with Salamander's Breath. The Third Eye's stream of attacks force Yami to focus on defending his team, and with the captain overwhelmed, the trio attack simultaneously. However, their attacks are countered by the arrival of three captains: Jack the Ripper, Nozel Silva, and Charlotte Roselei.[14]

When Nozel decides to attack Patri, Fana counters Nozel's attack and decides to battle him.[15] During the battle Fana is shocked along with everyone else when Asta suddenly lands a blow on Patri.[16] When Patri's mana starts to erupt, the Third Eye quickly move to seal Patri's mana. Fana then retreats along with Vetto, Rhya, and Valtos.[17]

Riding atop a grown Salamander, Fana leads the Eye of the Midnight Sun's forces in an assault on the Witches' Forest, while Mars and Ladros lead the Diamond Kingdom's forces and attack the forest from the opposite side.[18] Fana asks if Asta is within as she plans kill him and recover the magic stone, which one of her subordinates affirms and adds that Witch Queen is there, too. Fana has Salamander launch a fireball, which causes a large explosion and engulfs the forest in flames.[19] A large Security Golem rises from the forest and attacks, but Salamander easily destroys it, shocking the witches, who are then captured by the Eye of the Midnight Sun.[20]

The Black Bulls arrive on the battlefield, and after they free the witches and take out several members of the Eye of the Midnight Sun, Fana asks if Asta is the one who killed Vetto, and Salamander releases a fireball, which Asta reflects back. Salamander counters with a second fireball, causing a large explosion, and Fana emerges from the smoke and declares that she will kill Asta.[21] Fana dives at the Black Bulls and has Salamander swipe at them. They dodge but the surrounding forest is destroyed and catches fire. Asta leaps off a falling tree trunk and slashes Salamander, cutting the spirit with the Demon-Slayer Sword.[22] Asta then calls for a timeout and demands to know why she hates them and the Clover Kingdom, but she tells him to shut up and attacks him again. Vanessa Enoteca pulls him to safety and Finral Roulacase teleports him behind Fana. As Asta emerges, Fana prepares a spell in her hand, but Asta dispels it with the Demon-Dweller Sword and holds the other sword against her. He brings up how Vetto fell into despair, and demands again to know why she hates them.[23]

Fana remembers some events leading up to the humans massacring the elves. As her rage grows, the gem on her forehead crumbles and reveals a third eye. Several large crystals erupt from Fana and knock Asta back, and her overflowing demonic magic increases Salamander's size and power and manifests a number of large floating crystals.[24] Fana dives at them, and the heat rising from Salamander's body knocks them back. When Fana attacks again, Noelle Silva protects her friends with Cradle of the Sea Dragon. However, Salamander causes the water boil with just contact and destroys it with an attack, forcing the Black Bulls to retreat on makeshift brooms.[25] Fana and Salamander appear above them and attack, but Noelle counters with Roar of the Sea Dragon. Fana defends by enlarging one of the clumps of crystals, and although the water spell tears through it, the crystals provide Fana time to dodge. However, with a wave of her wand, Noelle turns the water dragon around, slamming Fana and Salamander from behind and dealing heavy damage to both.[26]

As Salamander falls because of its destroyed right wing, Finral and Asta try to take the opportunity to finish off their opponents. Fana attacks them with swarm of Harpes, which Asta destroys, and heals herself. Seeing the identical spells, Asta asks if she has a brother, which she denies.[27] With her Thread Magic, Vanessa slings Asta forward as Salamander finishes recovering. The spirit blasts Asta with fire, but the boy's swords allow him to pass unscathed. He then bisects Salamander, and Fana is left in disbelief.[28]

Asta demands that Fana surrender and comments that her friends and family would be sad if she continued, which angers Fana further. As Fanzell and Mars reach the battlefield with Ladros following, Fanzell calls out to Asta, and Fana takes advantage of Asta's distraction to attack. Fanzell tells Asta to knock the fireball at him, which the boy does, and uses his Wind Magic to direct it into Ladros.[29] With one enemy down, the group turns their attention to Fana and Salamander, and Mars notices the similarity of their flames.[30]

Calling out to her, Mars rushes towards his old friend, but Asta holds him back. Fana becomes more distressed and claims not to know him. As her anger and confusion grow, Fana declares that she will make everything disappear, and unleashes her mana and combines it with Salamander, creating a self-destructive sphere like Patri's and Vetto's. She releases several fireballs, one of which Asta nullifies and another Mars takes head on.[31] Mars and Asta charge Fana, who tells them to stay away and fires on them again, but they continue forward, countering her spells. As they get closer, the heat coming off of Fana's magic burns them, but Mars uses Phoenix Feathers Robe on himself and Asta to stave off the damage.[32] When they reach the sphere of man, Fana announces that it is the end, but Asta refutes this and swings his Demon-Slayer Sword, slicing through and destroying the sphere of mana.[33]

Fana releases her mana again and says that their hatred will never disappear. Mars dashes forward and embraces her, asking for her forgiveness. She remembers her time with Mars but these memories conflict with others. Suddenly her raging mana disappears, her third eye crumbles, and she calls Mars by name. As Mars cries, they hug amidst the destruction.[34] Mars thanks Asta for his help, and Fana is surprised and glad that Mars has made friends. Before Asta can talk to Fana, the other Black Bulls tackle him. Fana then recognizes Fanzell, who embraces Mars and Fana.[35] Fana explains to the other what she remembers of what happened after she died in the test. Fana tries to comfort Mars who is frustrated with himself, and he declares that he will never leave her again, which causes them both to blush. When Vanessa asks why the Eye of the Midnight Sun came to the Witches' Forest, Fana recalls a strong desire to take back a magic stone.[36]

Suddenly they are all attacked by Ladros.[37] Mars armors himself and protects Fana, and when Ladros tries to blast them again, Asta defends them.[38] Mars collapses atop Fana, who tries to heal him but is out of mana.[39]

After being stabbed by Asta's Demon-Dweller Sword and forced to retreat, Ladros grabs Fana and demands that she release her powerful magic, threatening to kill Mars. Desperate to stop him, she summons Salamander, which attacks the Diamond mage.[40] However, Ladros succeeds in absorbing the spirit, and Fana falls on Mars in exhaustion.[41]

After Asta defeats Ladros, the Witch Queen arrives and takes everyone captive.[42] Vanessa defeats the queen, freeing everyone.[43] 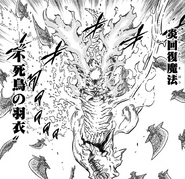 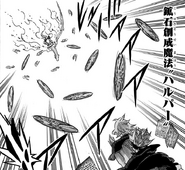 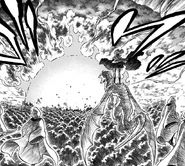 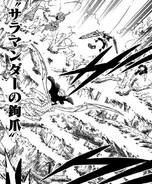 Mars is Fana childhood friend. The two are extremely close and are deeply in love, though neither seems to admit it. After Fana meets Mars again years later, he tries countless times to free her and protect her. The two promise to be together forever and see the world together.[4]

Retrieved from "https://blackclover.fandom.com/wiki/Fana?oldid=34888"
Community content is available under CC-BY-SA unless otherwise noted.