En is a young man with long, disheveled hair and a pair of circle-framed glasses. He is constantly shivering, which gives him a weak, sickly appearance.

En as a Royal Knight

En is a protective older brother and will come to the defense of others' younger siblings. Despite his weak appearance, he can become quite aggressive and energetic,[2] although this occurs through a proxy.[5]

At the Royal Knights Selection Exam, En is placed on Team P with Yuno and Noelle Silva.[6] Before their first match, En tries to encourage his teammates, but Yuno and Noelle start bickering. En then suggests that they focus on coming up with a plan.[7]

As the match begins, Yuno and Noelle fight over who will lead, and En decides to act as support.[8] Noelle protects Team P with Sea Dragon's Nest, but when Alecdora Sandler's Crushing Sand Clod absorbs the defense, Team P is forced to split up, with En running off by himself.[9] When Dmitri Brint tries to team up with Solid Silva to take out Noelle, En activates spores on Dmitri's robe and spawns a large, heavy mushroom, which drags the Coral Peacock down out of the air. En then rides past on a Running Mr. Mushroom.

As Noelle prepares to face her brother, En spawns a Talking Mr. Mushroom on her shoulder and uses it to criticize Solid for his poor behavior as a brother and to encourage Noelle. Aggravated, Solid lashes out with Death Dealing Sea Serpents, one of which cuts the talking mushroom, causing it to fall apart.[10] Team P wins the match when Noelle defeats her brother and destroys the crystal with Sea Dragon's Roar.[11] After the match, En praises Noelle's skill, while she notes that he is more confident when talking through mushrooms.[5]

En is pumped for the next match, but it ends swiftly thanks to Yuno. Team P then prepares to face Team I.[12] During the final match, En teams up with Noelle to take on Nils and Ruben.[13] En is shocked when Team I's crystal breaks while Rill Boismortier's and Yuno's spells clash. Team P are the winners of the match and the tournament.[14]

Several days after the exam, En and the others selected to be Royal Knights all assemble in the Royal Capital and are placed under the command of Mereoleona Vermillion.[15] After the squad change into their new robes, Mereoleona introduces additional members and reveals the location of the Eye of the Midnight Sun's base.[16]

After travelling to the Gravito Rock Zone, Mereoleona explains the situation and divides the squad into teams. Nozel Silva infiltrates the dungeon with En, Siren Tium, and Nils Ragus.[17] En is impressed by Nozel's ability to defend against the traps while attacking the enemies.[18]

After Nils and Siren are possessed by elf spirits, they turn on Nozel and En,[19] who escape with a smokescreen. They regroup with the other Royal Knights outside of the dungeon.[20] When Nozel receives word about more elves in the kingdom, he declares that they must save the country even if it means killing their fellow Magic Knights. Noelle, however, suggests that they can save their possessed comrades, with which the other Knights agree. Nozel then creates a vessel to convey them all back to the country.[21]

The Royal Knights reach Clover Castle just ahead of the dungeon.[22] The group of Magic Knights split up and head to different parts of the castle, with En, Kirsch, and Mimosa Vermillion heading to defend the Vermillion Estate.[23] Instead of directly fighting the elves, En spawns mushrooms to weaken the elves and to help hide the humans. The three Royal Knights are surprised when Baval manages to locate them.[24] After the Shadow Palace is summoned, Baval explains the elves' plan for their human vessels. Kirsch attacks the elf, but Baval's Dice Magic repels the swarm of petals and he runs off to the floating dungeon.[25]

The three Royal Knights then fly over to the Black Bull base and try to warn them about the elves' plan, but Reve traps a section in her Glamour World while Patolli and Drowa dismantle the rest of the building.[26] En, Kirsch, and Mimosa are then caught in Drowa and Eclat's Reflect Iris.[27] The magical paralysis is dispelled after Asta manages to strike the elves with his sword.[28]

After William Vangeance, Licht, and Asta exorcise the remaining elves, En and other Magic Knights help locate and rescue citizens trapped in the rubble from the battles.[29] 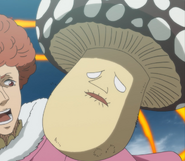 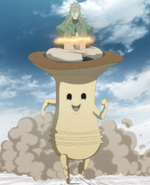 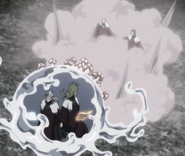