Episode 114
A dwarf 「ドワーフ Dowāfu」 is a member of an ancient race that lived alongside the elves and humans.[1]

Dwarves are human-like in appearance but short in stature. They are known for having special magic skills.[1] 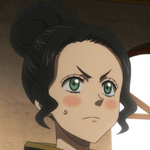