Drowa 「ドロワ Dorowa」[1] is an elf[2] and one of the ten Apostles of Sephirah.[3] He is reincarnated into the body of Gauche Adlai.[4]

As an elf, Drowa is a tall man. His shaggy white hair covers his left eye and has a long tail-like lock that hangs from the back of his head.[2]

While possessing Gauche Adlai, two tattoos appear on his face: both extending down from his forehead and across his eyes. The right one extends further down onto his right cheek. His ears also become pointed.[5][6] 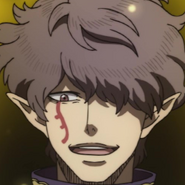 Drowa portrays himself to be calm and level-headed during battle. He is also confident in his and his sister's fighting ability despite their opponents' superior numbers,[7] as shown when he tells Patolli to leave an entire group of Magic Knights to them.[8] Drowa also has a dry and sarcastic sense of humor, as he playfully teases Patolli about finally becoming Licht and his admiration of the latter.[4]

Much like his fellow elves, Drowa holds a strong hatred and contempt for humanity, especially towards the Clover Kingdom's royals, due to them stealing the elves' mana to bolster their own and then killing the weakened elves.

Drowa and some of the other elves enjoy a meal the day before Licht and Tetia's marriage.[9] After the wedding, the human royals enact the Massacre of the Elf Tribe.[10]

Five centuries later, Patolli reincarnates the elves, and Drowa possesses Gauche Adlai. He attacks the Black Bull Magic Knights around him[11] before heading to the Royal Capital.[12]

Drowa collects Eclat and they travel up into the floating dungeon. Patolli arrives shortly after them, and Drowa teases him for looking like Licht. Rhya then appears to greet them.[4] Once all of the Apostles of Sephirah assemble atop of the floating dungeon, they summon the gate to the Shadow Palace.[13] After watching the Black Bulls defeat several elves, Reve pulls part of the base into her Glamour World, and Drowa and Patolli combine their magic to destroy the rest of the base. Drowa then tells Patolli to follow Licht and the others into the Shadow Palace.[14][15]

Drowa and Eclat combine their magic to immobilize the survivors, but Asta's Demon-Destroyer Sword frees him, Gordon Agrippa, Grey, and Henry Legolant. Drowa attacks with Reflect Refrain, and the four defend themselves, with Asta sending back one of the attacks which grazes Drowa's shoulder.[16] Drowa teleports Asta up into the air and attacks him from all around. Henry encloses Asta in part of the base, protecting him from the attacks and buying him time to activate his black form. Asta flies around and shatters Drowa's mirrors. When the boy attacks Drowa directly, the elf immobilizes him with a reflection of Eclat in his mirror eye. Drowa prepares to blast Asta with Large Reflect Ray, but the other Black Bulls create a mirror shell to protect Asta.[17]

Drowa distracts Asta by creating a mirror ball and using it to scatter magic blasts which draw Black Asta away from the elves until his form runs out of time. Drowa then makes a large reflection of Eclat's eye, forcing the Black Bulls to close their eyes and take shelter in the remains of their base. Grey transmutes the base's surface into mirrors to block incoming attacks, but when the base flies close to Drowa, he teleports them into a position where he can attack the non-mirror parts. Henry ejects the others and then throws himself at the elves, planning to absorb their mana, but it is not strong enough to deplete Drowa.[18] Gordon, Grey, and Asta work together to save Henry and to open Drowa and Eclat to an attack from Black Asta.[19]

The hit cancels out the mirrors and enchantments for Reflect Iris, freeing the captured Magic Knights. Drowa remembers the massacre and his hate for humans and realizes that the Wicked Heart is affecting his thoughts and would likely cause him to lose control of himself soon. He asks Asta to free them and apologizes to Eclat and the other elves. Before Asta breaks the Reincarnation Magic, Drowa warns him about the Demon-Destroyer Sword.[20] 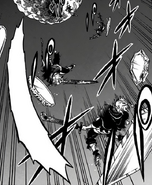 Drowa is protective of his younger sister, Eclat, who clings to his side.[4]