Start a Wiki
watch 01:06
'Black Clover' Profile: Dorothy Unsworth
Do you like this video?

Dorothy Unsworth 「ドロシー・アンズワース Doroshī Anzuwāsu」[2] is a witch from the Witches' Forest[3] and the captain of the Clover Kingdom's Coral Peacock squad of the Magic Knights.[4][5]

She is the human host for the elf Reve.[6]

Dorthy is a young looking, lilac-haired fair-skinned woman of slightly below average height.

Dorothy wears a pointed hat with a wide brim and a garland of natural flowers wrapped around the cone's base. Her outer cloak is clasped by a flower-shaped brooch. The cloak layers so that her insignia is on the cloak of her cape. Beneath her cloak, she wears a light-colored shirt with puffy sleeves that end just past her elbows, light-colored puffy short pants, and a dark-colored vest that has light-colored fur draping down over her hips. Her shoes are pointed and colored in contrast with a deeper shade of her squad's color.

While possessed by Reve, two tattoos appear on Dorothy's cheeks and her ears become pointed.[7] 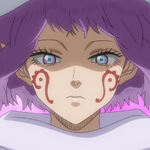 Dorothy seems to be a heavy sleeper as she is asleep all the time, despite how much noise is made around her. However, she still seems aware of her surroundings while sleeping, as she votes in the entrance exam[8] and walks by herself during various times.[9][10]

When she is awake, Dorothy is very chipper with a carefree, caring, playful and highly energetic "big sister" attitude.[11]

Dorothy attends the Magic Knights Entrance Exam[12] and afterward requests Yuno and passes on Asta to join her squad.[8]

At Julius Novachrono's request, Dorothy attends a meeting of the captains and sleeps while the other discuss and argue,[13] for which Yami Sukehiro yells at her. Marx Francois then contacts them and requests that they come down to the dungeon.[14] There, the captives Catherine and George reveal that Gueldre Poizot is the traitor,[15] and Dorothy sleeps through the resulting fight.[16]

The captains watch as Marx displays Gueldre's memories, and afterward Julius demands that they keep the incident a secret and investigate their own squads before they go their separate ways.[17]

Dorothy attends the Star Awards Festival but is asleep for the whole ceremony.[10]

Weeks later, after Patolli sets the last magic stone in the sephirot, Dorothy is possessed by Reve.[18]

After Reve traps some Black Bulls in her Glamour World, they trick her into imagining a copy of Dorothy. The captain thanks them and takes over the fight with Reve. Dorothy delights in fighting someone with the same magic, and the two overwhelm the spell with their creations, which causes it to collapse. As her body dissolves, Dorothy thanks Reve for the fun.[19]

Later that night, all the remaining elves are exorcised after William Vangeance and Licht combine their magic to connect the elves to a giant tree through which Asta sends Anti Magic.[20]

A few days later, Dorothy is awake and helping with the reconstruction effort. She is approached by Noelle Silva who asks about Acier Silva's connection with a devil.[21] Dorothy leaves three of her squad members to finish the cleanup effort. She then pulls Noelle into her Glamour World so that they can discuss in secret and safety. Dorothy initially teases Noelle with a copy of Asta, which Noelle blasts away. Dorothy then creates a copy of Nozel and reveals that Acier died because of a devil's curse. She explains that the curse will kill anyone who speaks of it in the outside world, so Nozel could never tell his siblings. She further explains how devils manifest in the living world and warns that their influence has been spreading.[22]

Retrieved from "https://blackclover.fandom.com/wiki/Dorothy_Unsworth?oldid=67561"
Community content is available under CC-BY-SA unless otherwise noted.