Dorothy Unsworth 「ドロシー・アンズワース Doroshī Anzuwāsu」[2] is a witch from the Witches' Forest[3] and the captain of the Clover Kingdom's Coral Peacock squad of the Magic Knights.[4][5]

She is the human host for the elf Reve.[6]

Dorthy is a young looking, lilac-haired fair-skinned woman of slightly below average height.

Dorothy wears a pointed hat with a wide brim and a garland of natural flowers wrapped around the cone's base. Her outer cloak is clasped by a flower-shaped brooch. The cloak layers so that her insignia is on the cloak of her cape. Beneath her cloak, she wears a light-colored shirt with puffy sleeves that end just past her elbows, light-colored puffy short pants, and a dark-colored vest that has light-colored fur draping down over her hips. Her shoes are pointed and colored in contrast with a deeper shade of her squad's color.

While possessed by Reve, two tattoos appear on Dorothy's cheeks and her ears become pointed.[7]

Six months after the elves' attack, Dorothy has replaced her flower brooch for one resembling a peacock feather.[8] 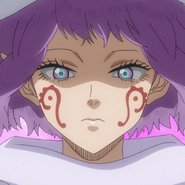 Dorothy seems to be a heavy sleeper as she is asleep all the time, despite how much noise is made around her. However, she still seems aware of her surroundings while sleeping, as she votes in the entrance exam[9] and walks by herself during various times.[10][11]

When she is awake, Dorothy is very chipper with a carefree, caring, playful and highly energetic "big sister" attitude.[12]

Dorothy attends the Magic Knights Entrance Exam[13] and afterward requests Yuno and passes on Asta to join her squad.[9]

At Julius Novachrono's request, Dorothy attends a meeting of the captains and sleeps while the other discuss and argue,[14] for which Yami Sukehiro yells at her. Marx Francois then contacts them and requests that they come down to the dungeon.[15] There, the captives Catherine and George reveal that Gueldre Poizot is the traitor,[16] and Dorothy sleeps through the resulting fight.[17]

The captains watch as Marx displays Gueldre's memories, and afterward Julius demands that they keep the incident a secret and investigate their own squads before they go their separate ways.[18]

Dorothy attends the Star Awards Festival but is asleep for the whole ceremony.[11]

Weeks later, after Patolli sets the last magic stone in the sephirot, Dorothy is possessed by Reve.[19]

After Reve traps some Black Bulls in her Glamour World, they trick her into imagining a copy of Dorothy. The captain thanks them and takes over the fight with Reve. Dorothy delights in fighting someone with the same magic, and the two overwhelm the spell with their creations, which causes it to collapse. As her body dissolves, Dorothy thanks Reve for the fun.[20]

Later that night, all the remaining elves are exorcised after William Vangeance and Licht combine their magic to connect the elves to a giant tree through which Asta sends Anti Magic.[21]

A few days later, Dorothy is awake and helping with the reconstruction effort. She is approached by Noelle Silva who asks about Acier Silva's connection with a devil.[22] Dorothy leaves three of her squad members to finish the cleanup effort. She then pulls Noelle into her Glamour World so that they can discuss in secret and safety. Dorothy initially teases Noelle with a copy of Asta, which Noelle blasts away. Dorothy then creates a copy of Nozel and reveals that Acier died because of a devil's curse. She explains that the curse will kill anyone who speaks of it in the outside world, so Nozel could never tell his siblings. She further explains how devils manifest in the living world and warns that their influence has been spreading.[23]

Six months later, after the Golden Dawn's and Black Bull's bases are attacked and their captains are abducted, the remaining captains gather for a meeting and are briefed on the Dark Triad's plot, which Dorothy sleeps through. The meeting is interrupted by the sudden arrival of Nacht Faust and Asta.[24] After Julius vouches for Nacht's identity as the Black Bull's vice-captain and a spy in the Spade Kingdom, Dorothy continues sleeping as Nacht explains the Tree of Qliphoth's ritual and structure. Afterward, Nacht expresses his desire to build a team around Asta and his Anti Magic in order to rescue Yami and William and to destroy the Tree of Qliphoth.[25] The meeting is adjourned after Nacht announces that the team will leave on the morning of the third day.[26]

Three days later, Dorothy and the other Magic Knights selected for the Spade Kingdom invasion gather at the Magic Knights Headquarters.[27] After infiltrating the castle,[28] Dorothy, Rill, and Charlotte split off to face Vanica Zogratis. Dorothy trails behind to handle the Dark Disciples along the way, while Rill and Charlotte continue on to fight Vanica.[29]

Later, when the first gate to the underworld opens, Nachts sends Walgner to lead Dorothy to the underground ritual chamere where Moris Libardirt is accelerating the ritual. Dorothy fights Moris, but his devil-boosted Modification Magic destroys her Dream Magic and severely injures her.[30] When the Black Bull base smashes through the castle to the chamber, she is delighted to see them.[31] After the Black Bulls defeat Moris, Dorothy compliments their work. Shortly after, the second gate to the underworld opens and Lucifero partially manifests through the combined bodies of the lower-ranked devils. As the monstrous form bursts out of the castle, the Black Bull base recombines with remnants of the castle in order to fight the monster.[32] After Asta slices the monster and destroys the Qliphoth Advent Ritual, Dorothy and most of the other captains meet up and relax over their victory. However, Lucifero compresses the monster's remains into a body, through which he manifests in a half-complete form. He then forces the humans to prostrate themselves before him.[33]

Asta attempts to fight Lucifero, but once Asta is sent crashing into the ground, the captains rally around him and prepare to fight Lucifero.[34] Dorothy attempts to send the devil to the Glamour World, but he disperses her magic and sends her flying backwards.[35] Despite their injuries, Dorothy and the other captains refuse to give up.[36] Asta manages to cut off the tip of one of Lucifero's horns, which infuriates the devil. Dorothy pulls Asta out from under Lucifero and passes the injured Black Bull to Charlotte. After Mereoleona is punched away, Dorothy uses her magic to catch Mereoleona. However, Lucifero barges through and knocks aside Dorothy and Charlotte in his pursuit of Asta.[37]