Dominante Code 「ドミナント・コード Dominanto Kōdo」[1] is a witch and former magic tool craftsman from Diamond Kingdom. She is the wife of Fanzell Kruger.

Dominante is a slender woman with fair skin and orange hair tied in a knot by a blue hat. She wears a long-sleeved dark violet dress with a brown belt and cloak over her shoulders.

Dominante Code is a friendly and kind person. Nevertheless, she is also rather greedy. She physically vents her frustration on Fanzell for having them live in a ramshackle house, and she promotes her magical goods to her comrades at a cost.

Dominante was born in the Witches' Forest. Years later, she falls in love with Fanzell Kruger and leaves with him to the Diamond Kingdom.[2] There, she becomes well known for her skill with magic tools.[3]

After growing dissatisfied with the state of the kingdom, Dominante and Fanzell flee together but are separated. Dominante sets up a shop in Kikka's Black Market and befriends Vanessa Enoteca. One day, Dominante sells a wand and brooch to Noelle Silva.

When Galleo, Mariella, and a squad of assassins infiltrate the Clover Kingdom in search of the fugitives, the Black Bulls defeat the Diamond soldiers and reunite Dominante and Fanzell. Afterwards Dominante, Fanzell, and Mariella settle in a house outside of the Diamond Kingdom.[4]

In search of a cure for Asta's cursed broken arms, Noelle Silva and Finral Roulacase visit the Diamond Kingdom fugitives. Dominante greets them and berates Fanzell for greeting Noelle while he is naked. They all sit down and Noelle recounts how Asta's arms were cursed. Dominante suggests that the Witch Queen may know how to remove ancient curses, but warns them of her and Vanesa's history and of the queen's dangerous nature.[5] The group then warps to the Black Bull headquarters and picks up Asta.[6]

Outside of the forest, Dominante warns them again of the dangers within and produces two invisibility cloaks to hide them. She then leads them to a secret path through the wall.[7] Dominante shares her broom and cloak with Noelle and Mariella, and as they are flying Dominante tells them about the Security Golems. When Fanzell's cloak and clothes are pulled off by a branch, the group is swarmed by golems and rushes into the palace, crashing on the floor.[8] Dominante greets Vanessa when she wakes up.[9]

Dominante agrees to help fight the two armies attacking the forest in exchange for the Witch Queen healing Asta's arms.[10] Dominante, Fanzell, and Mariella head out to deal with the Diamond Kingdom's army. While Fanzell confronts the army directly, Mariella organizes the witches into teams in the forest below, and Dominante repurposes the Security Golems into proximity mines.[11] When Ladros unleashes his Million Lasers on the forest, Fanzell rushes to Dominante and protects her a whirlwind. Ladros finds them and lifts Dominante up. She uses her wand to blast Ladros in the face when he calls Fanzell a coward, so he throws her into the air and launches a magic blast at her. Mars catches Dominante and blocks the attack.[12]

After Mariella's failed attempt to kill Ladros, Mars knocks Ladros away and then creates a platform of crystal to carry Dominante, Fanzell, and Mariella. As the fly away and avoid Ladros's atttacks, Mars heals their wounds. Dominante and Mariella later split off, while Mars and Fanzell lure Ladros away.[13]

After all of the fighting is over and the Witch Queen has healed everyone, Fana decides to live with Dominante, Fanzell, and Mariella. The group then returns to their house.[14] 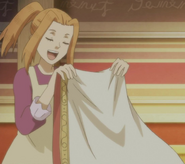 Fanzell Kruger is her husband. Although she loves him deeply, his nakedness habit and their disappointing life together frustrate her, and she frequently vents this frustration by yelling at him and pummeling him with her fists.[21] Despite these outbursts, she defends Fanzell's character when Ladros calls him a coward.[22]

In Black Clover: Grimoire Battle, Dominante appears as a Black Market vendor and sells various items to the player.