While possessed by an elf spirit, two red tattoos appear on Digit's cheeks and extend below his jaw, and his ears become pointed.[4] 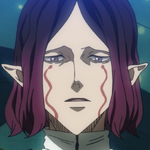 Digit possessed by an elf

Digit is a nervous and easily confused man. He is also shown to be extremely curious and excited about rare types of plants.[5]

Digit is patrolling the Forsaken Region when an elf spirit possesses him[5] and attacks Hage.[3] After the elf is exorcised,[6] Digit accompanies Yuno on his journey to defend the Clover Kingdom from other elves.[7] Digit, Yuno, and a group of Magic Knights eventually reach Clover Castle and defeat a group of possessed Golden Dawns.[8]

Retrieved from "https://blackclover.fandom.com/wiki/Digit_Taliss?oldid=59084"
Community content is available under CC-BY-SA unless otherwise noted.