Devils or demons 「悪魔 Akuma」[1] are an ancient race of magical beings that dwell in the underworld.[2]

Devils are generally large and humanoid in appearance with pointed teeth, horns, tails, and bat-like wings. Every devil seen so far has access to particularly formidable and frightening forms of magic, such as Anti Magic and Kotodama Magic.

The devils seem to have a caste society, with low-ranking devils disparaged and looked down upon by the more famed and higher-ranking devils like Lucifero.[5] 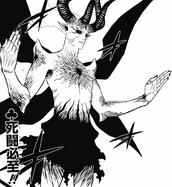 Retrieved from "https://blackclover.fandom.com/wiki/Devil?oldid=63019"
Community content is available under CC-BY-SA unless otherwise noted.