For the special corpse used by Rades Spirito, see No.3 - David.

David Swallow 「ダヴィド・スワロー David Suwarō」 is a nobleman and a member of the Clover Kingdom's Golden Dawn squad of the Magic Knights. He is also the human host for the elf Baval.[1]

David is a tall young man with blue eyes and short blond hair. He wears the Golden Dawn uniform and squad robe.

While possessed by Baval, two red tattoos appear on his forehead and his ears become pointed.[2] 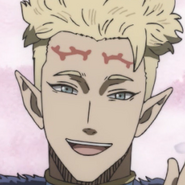 David is a relaxed and affable individual[3] who cares for his squadmates' well-beings.[4][5]

After Patolli sets the last magic stone in the sephirot, David is possessed by Baval and gathers together with the other possessed Golden Dawns.[6] During the Battle of Clover Castle, Zagred manages to seize control of David's body from Baval. Once the Shadow Palace is opened, Zagred flies through the gate and switches to Ronne's body,[7] leaving David and Baval unconscious.[8]

Later that night, all the remaining elves are exorcised after William Vangeance and Licht combine their magic to connect the elves to a giant tree through which Asta sends Anti Magic.[9]

Six months later, David is walking around the Golden Dawn base with two other squad members. They discuss Yuno's recent message from Hage and his quick rise to the vice-captain position.[3] Suddenly the base is attacked by Spade Kingdom mages, and David alerts Yuno to the attack.[10] The Golden Dawns concentrate their offensive spells on the invaders, but the Dark Disciples Gaderois Godroc and Foyal Migusteau withstand the attacks while Zenon Zogratis heads to the upper floors to find William. David watches helplessly as Gaderois rampages through the squad members and smashes David into the stairs.[11] Yuno returns to the base and confronts Gaderois. During the fight, Yuno evades attacks while moving the critically injured but alive Knights to safety.[12]

After Zenon captures William and leaves, William's Budding of Yggdrasil activates and heals the injured Golden Dawns. David is grateful that the spell managed to save them, but is saddened that half of them were already dead or beyond saving.[13] 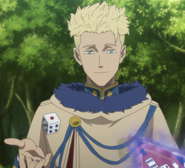