Damnatio Kira 「ダムナティオ・キーラ Damunatio Kīra」[1] is a nobleman of the Clover Kingdom's House Kira, one of its royal families. He is also the chairman of the country's Magic Parliament.[2]

Damnatio is a pale-skinned man with short, black hair combed back, except one lock that hangs down over the center of his forehead. He has a small, black dot just below his lower lip and above his chin. His face is usually portrayed as very stern with little or no emotion being shown on it.

He wears a long-sleeved green robe that flares out at the collar. Over this he wears a white stole that has a clover shape on the back, and underneath, he wears a pair of black boots.

As his name suggests, Damnatio has a love of condemnation and damning people he considers evil, showing little interest in giving the benefit of the doubt or mercy to anyone in his sights. He is considered coldly devoted to justice as he has tried and sentenced his own father in the past. More recently, he has stated at Asta's trial that there were two options regarding the outcome of the war with the elves; either Asta, a devil user be blamed for the events, or the Magic Knights would have to be investigated. As the Magic Knights (the overwhelmingly vast majority are nobility) are the core of the Clover Kingdom's defenses, he called the choice obvious. This shows that his aspirations are more politically based rather than justice-based. Damnatio also shows calculated and extreme ruthlessness when he attempted to have Marie Adlai, a young child, tried and executed. When Asta protects her, Damnatio 'informs' Asta that escape is pointless, as even if he did escape, he would be a wanted man and everyone at the church he grew up with would have to be executed, a casual and overt threat. Damnatio likely knew Asta would show his hand once his family and friends were threatened, and did this just to ensure that Asta would be readily condemned by the nobility present (due to their own prejudice), which was Damnatio's goal all along.

He has been portrayed as a very cold and calculating character, seemingly indifferent to everything and everyone (including his family), being only devoted to his duty of administering justice. There is little love shown between him and his brother, and the fact that he has condemned his own father, shows that he places little value on family bonds or friendships, in stark contrast to the Black Bulls. There is a part of him that allows for some degree of leniency, though he hardly ever shows it. He does have great trust in Julius Novachrono and respects his ability, but that does not often keep him from performing his duty, it only delays it for a period of time.

Damnatio saves Augustus Kira Clover XIII from four anti-monarchist nobles. Afterwards, he senses an emergence of demonic possession, which he vows to bring to justice.[3]

A few days later, Damnatio invites Asta and Secre Swallowtail to the Magic Parliament Courthouse to testify about the war. However, Damnatio has them arrested and puts them on trial for using Forbidden Magic, in an attempt to characterize them as devils and at fault for the war. When Asta is unable to prove the existence of another devil, Damnatio sentences Marie Adlai to be executed, and Asta is forced to protect her with his black form, revealing his devil's power.[4] Damnatio tries to convince Asta to give up and tells him that if he were to flee, the people of his hometown would be at risk and that there is no one who will defend him because he is evil. Suddenly, the other Black Bulls barge into the courthouse to rescue Asta and Secre.[5] Damnatio points out that fighting would only increase the seriousness of Asta's crimes and then shrinks their magic. To Damnatio's shock, Asta uses the Demon-Destroyer Sword's ability to remove the effects, and Yami charges at Damnatio.

Nozel Silva and Fuegoleon Vermillion interrupt the fight and pass on a mission from Julius Novachrono: The Black Bulls will be exiled while the squad investigates devils and monitors Asta and Secre. Damanatio's scales show that the other nobles' opinions have shifted into balance,[6] so Damnatio postpones the final judgment but warns Asta that he will be executed if he does not return with the necessary proof.[7]

Damnatio then visits Julius in the Magic Knights Headquarters. He criticizes the Magic Emperor's decision and points out that neither the kingdom nor Julius can bear the responsibility of forgiving the crimes, but Julius counters that it is about putting trust in Asta and the Black Bulls. Julius believes that the scales will tip in their favor, and Damnatio warns that if the kingdom is threatened, he will be forced to judge them all, including Julius. Damnatio then leaves and passes Marx Francois who is rushing to see Julius.[8]

Six months later, when a demon attacks the Clover Kingdom, Damnatio agrees to help Julius defend the kingdom.[9] After the Magic Knights fail to stop the demon, Damnatio shrinks one of its attacks so that it is small enough for Julius, who has temporarily aged himself, to negate. Damnatio then uses his magic to hold the demon in place, while Julius attempts to destroy one of its arms. However, Julius's magic gives out, and Damnatio struggles to hold it any longer. As the demon begins charging an attack, Asta arrives and drives Black Divider into the mass of magic power.[10] Damnatio watches in stunned silence as Asta Unites with Liebe, erases the entire charging attack, and then easily cuts apart and defeats the demon.[11] 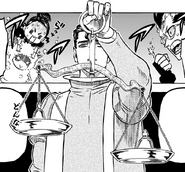