Cob Portaport 「コブ・ポルタポルト Kobu Porutaporuto」[1] is one of the advisers of the Magic Emperor[2] and a member of the Royal Knights squad.[3] He also is the human host for the elf Ado.[4]

Cob has fluffy hair. He is wearing fancy clothing and wearing a cape.

While possessed by Ado, two tattoos appear on Cob's cheeks and his ears become pointed.[4][5] 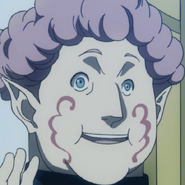 For the Royal Knights Selection Exam, Cob creates a door that transports the Magic Knights from the arena to the tournament field.[2]

Cob fetches Sekke Bronzazza, saving him from Yami Sukehiro, and drops the rest of Teams B and G on the battlefield.[7]

Several days after the exam's completion, Cob is enlisted into the Royal Knights for his Spatial Magic.[3] He opens a doorway to the Gravito Rock Zone's floating dungeon,[8] and Mereoleona Vermillion orders him to remain outside while the rest of the squad divides into teams and enters the base.[9] Cob jams other Spatial Magic to impede Valtos and others from returning to the base.[10]

After Patolli sets the last magic stone, Cob is possessed by the elf Ado.[4][5] Later that night, all the remaining elves are exorcised after William Vangeance and Licht combine their magic to connect the elves to a giant tree through which Asta sends Anti Magic.[11]