Charla 「チャルラ Charura」 is an elf[2][3] and is reincarnated into the body of Charlotte Roselei, captain of the Blue Rose squad.[4]

As an elf, Charla is a tall woman with long white hair pulled back into a ponytail, except for two sections in the front that are parted on her right side.[3] 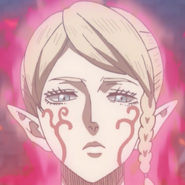 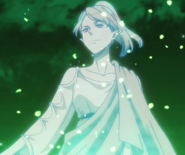 Charla as a spirit 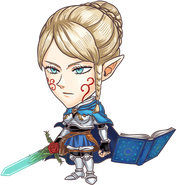 Charla is arrogant and thinks little of humans but cares for her little brother. However, after fighting against and alongside Yami Sukehiro, she manages to see them in a better light before departing from Charlotte's body.

Charla and her younger brother Lufulu are carrying food when Rhya passes them on his way to a meal with Licht.[5] The next day, after Licht and Tetia's wedding, the villagers are massacred by humans.[6][7]

Five centuries later, Patolli reincarnates the Elf Tribe, and Charla possesses Charlotte Roselei.[8] She attacks the Blue Rose Magic Knights around her[9] before heading to the Royal Capital.

Charla sees Yami Sukehiro knock out two elves, who are possessing Marx Francois and Owen. She uses her Briar Magic to separate them from Yami and then confronts the Black Bull captain.[8] Pursuing Yami through the city, she destroys the city with attacks while he orders the citizens to evacuate.[10] Sol Marron arrives and tries to save her captain but fails due to Charla's overwhelming magic.[11] After Yami takes over and throws Sol aside, Charla surrounds Yami with thorns, which he draws into his Black Hole. She blocks his sword with her own while he yells at her for making Charlotte's underling cry. Recognizing Yami's strength, Charla pours her magic into a single attack, but Yami slices through it with Dark Cloaked Dimension Slash.[12] Her spell still destroys the buildings nearby, burying Yami in rubble.

Charla is impressed with Yami's strength and remarks that they underestimated humans. Rising up on a tall briar bush, she checks the location of Licht and the others and then leaves with Marx and Owen in tow.[13]

After the Shadow Palace is summoned, Charla follows Baval through the gate. She grows suspicious when she finds Baval unconscious, and rushes to the top level. She saves Licht from Zagred's Iron Spear and then teams up with Yami to fight the devil. She uses her briars to block Zagred's attacks and provides an opening for Yami to sever an arm and wing from the devil,[14] but Zagred simply reattaches them with magic. While Charla and Yami try to figure out the limits of the devil's magic, Licht absorbs one of Yami's Dark Cloaked Avidya Slashes and releases it in time to sever Zagred's tail. The devil then summons a creature from the underworld.[15]

Charla tries to stop it with her briars, which the creature absorbs and dissolves. The creature almost buries Charla, but Yami extends his sword and pushes her to safety. However, the creature severely injures Yami's left arm. Charla, Yami, and Licht are unable to stop the creature from pouring out of the room and down into the other chambers.[16] Charla and Yami hide in a Black Cocoon, while she heals his arm.[17]

After Licht is fully awakened, he draws power from Charla and the other elves in order to destroy Zagred and its portal to the underworld.[18] Charla finishes healing Yami's arm, and the pair look up at the destruction caused by Licht's attack.[19] When even more of the devil's magic pours down, Charla worries that it will destroy everything.[20] Lemiel Silvamillion Clover and Licht send protective auras to the elves.[21] Charla relays to Yami information about the events and layout of the upper room. She then decides to aid his final attack and wraps her magic around his sword.[22] Although she is impressed by Yami's focus, she is still uncertain that his attack will reach. Yami releases Dark Cloaked Dimension Slash: Equinox and slices Zagred in half.[23]

After Asta kills Zagred, Charla compliments Yami and supports him when he slouches from exhaustion. They then notice that the devil's magic has not disappeared whereas Lemiel's protection is waning.[24] To reach the upper room, Yami cuts through the devil's magic while Charla and Revchi Salik propel them upward.[25]

After the group successfully escapes the Shadow Palace, William Vangeance and Licht combine their magic to connect the elves to a giant tree through which Asta sends Anti Magic.[26] As her spirit departs, Charla admits that she enjoyed fighting alongside Yami before bidding him farewell.[27]