Catherine 「キャサリン Kyasarin」 is a rogue witch from the Witches' Forest[1] and a member of the Eye of the Midnight Sun.[2]

Catherine has the appearance of an adult woman with long, curly, blonde hair. She has magenta eyes and thick dark eyelashes and wears dark red-violet lipstick on her lips. A golden necklace with a magenta star-like pendant, which is connected to another chain with a similar piece at the end, adorns her neck. Additionally, she wears a black hat with a furry brim and a long conical crown. There are two fuzzy pale lilac balls on the left side of the brim as well.

Catherine wears a black dress with furry skirt. It slightly exposes her chest through a diamond shaped opening and also features a fur trimmed collar. The sleeves are sightly wider on the upper arm with three diamond-shaped designs stacked linearly on each of them. Similar designs, but in horizontal orientation, are also located on her waist. Furthermore, a pair of fuzzy pale lilac balls, similar to those on her hat but much larger, are also placed on her behind.

When Catherine loses almost all of her mana, her appearance alters into the look of an elderly woman. She also loses most of her muscle tone, with wrinkles prominently covering her face as if she were extremely malnourished. Her hair also turns gray.[3]

Catherine is a narcissistic person who deeply cares for her appearance. Due to this, she is extremely sensitive of other's opinion in that regard. She quickly changes her attitude to Yuno from a seductive lady to a merciless witch after Yuno remarks about her appearance. However, it does not stop her from asking the surrounding people for their opinion of her. Other remarks that she finds insulting could also instigate her anger, such as when a citizen calls her a monster.[4]

Despite her self-involvement, she is fiercely loyal to Licht and Eye of the Midnight Sun, as she refuses to give up any information willingly.[5]

As soon as Valtos teleports the Magic Knights away from the Royal Capital, Catherine reveals herself to the citizens and starts absorbing their mana, which causes several of them to pass out. However, Yuno, who managed to escape the Spatial Magic spell, interferes while she is torturing one of the citizens. Catherine is immediately attracted to Yuno, but his comments towards her spark a fight between them.[6]

During the fight, Yuno asks Catherine for the reason behind the invasion. She does not reveal any significant information, other than their mission to assassinate a certain someone.[7] Over time, Catherine begins to overwhelm Yuno as her Joyful Destructive Ash spell deteriorates his senses.[8] However, when she is confident of her victory, Yuno suddenly gathers a considerable amount of mana around himself and summons Sylph. Catherine is rendered unable to evade nor retaliate when Yuno releases a devastating attack towards her.[9]

After exhausting all of her mana to withstand Yuno's attack, Catherine crashes into one of the nearby towers. Seeing several people are inside the tower, she immediately tries to steal their mana, but Charmy Pappitson, who thinks Catherine is trying to steal her food, refuses to succumb to the threat and launches a Sleeping Sheep Strike, which sends Catherine flying away from the tower and leaves her unconscious on one of the rooftops.[10][2]

Not long after, Charmy restrains Catherine while the witch is still unconscious.[11] She is then taken to a room where Marx Francois, one of the Magic Emperor's aides, tries forcefully to extract information from her and George's minds. However, the aide's attempts result in failure due to a protection magic spell cast on them. Subsequently, Catherine declares that she would not give them any information even if she were not being protected by said spell.[12]

Days later when Asta is brought to her and George to undo the spell that is protecting their minds, Catherine wonders who Asta is. George reveals that Asta has Anti Magic, so Catherine pleads for the boy not to undo the spell. Asta does not listen and taps them with his sword, removing the mental protection. Catherine and George are then put under Marx's spell and forced to answer questions.[13] When the captains of the Magic Knights are summoned before them and Julius asks who is the traitor among them,[14] the captives reveal that captain of the Purple Orca squad, Gueldre Poizot, is the traitor.[15]

Months later, after Patolli places the last magic stone in the sephirot, the Eye of the Midnight Sun members are all sacrificed. Their bodies burn up as their mana and souls are extracted.[16][17] 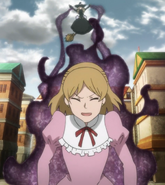