View source
watch 01:15
Who are the Black Bull?
Do you like this video?
Play Sound

Black Bull 「黒の暴牛 Kuro no Bōgyū」 is one of the nine squads of the Clover Kingdom's Magic Knights. The squad is known for its destructive behavior and has been regarded as the worst squad of the organization.[2][3]

Like the other eight squads, Black Bull follows the orders of the Magic Emperor and will act according to his requests.[4] All squads, including the Black Bull, perform missions all around the Clover Kingdom whether they are official or unofficial.[5]

Additionally, the Magic Emperor awards stars to squads whenever they have performed excellently on their respective missions. The Black Bulls had gathered -31 stars due to destructive behavior that caused their performance to be more harmful than the threat of the missions themselves. However, due to Asta's arrival in the squad and the recent mission successes, they no longer have any black stars.[6] Additionally, while officially only coming in second during the Star Awards Festival, they would have beat Golden Dawn's 125-star count by 7, had they not been starting in the negative.

The squad's signature robe is a black mantle with gold trimming and hood. It has a gold-colored button located at the right-hand side to hold it together, while the left-hand side displays the squad's insignia.

Vanessa Enoteca uses her Thread Magic to mend and alter clothing for her squadmates.[9][10]

Black Bull is led by Yami Sukehiro, a captain who has the duty to delegate missions, relay messages received from the Magic Emperor, and distribute the members' salaries.[11][12][6] Additionally, the captain decides whether a mage is to be accepted into the ranks of the squad. The decision can be made after the captain has seen the potential member's ability during the exam or out of sheer compassion.[13][14]

Black Bull's base of operations is a headquarters that houses all of the members. The headquarters is in the form of a large, tall house with asymmetric structures. The house consists of multiple stories with most of them made of stone and brick. It has a large number of windows and chimneys and a single wooden gate for a front entrance. The base is located in a forest within the Common Region.[23][24] It is later relocated to a forest in the Neutral Zone near the border of the Spade Kingdom as part of the squad's mission to investigate devils.[25]

Several features of the house are a dining hall where the members have their meals, a kitchen to complement the hall, a public bathing area, an underground cage filled with beasts, and a female living quarters which is heavily protected with traps.[26] Regarding living quarters, it would seem to have been established that the senior members have larger quarters than the newer members.[27]

The base frequently changes layout because of Henry's magic,[28][29][30] and can be mobilized if necessary.[31] During the battles with the Eye of the Midnight Sun and the elves, the base sustains heavy damage and is eventually reduced to a single small room.[32] A few days later, Henry has rebuilt it to its former size and layout.[33] 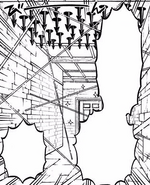 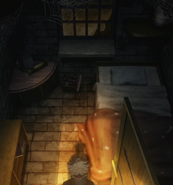