Baro 「バロ」[1] is a rogue mage affiliated with the Eye of the Midnight Sun.[2] 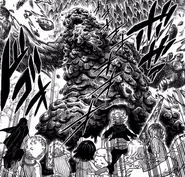 Baro turned into a monster

Baro concept art
Add a photo to this gallery

Baro is a selfish and greedy man who is willing to torture children and to betray allies for money.[3][4]

When they are children, Baro comforts a crying Neige with a mud doll.[5]

Years later, Baro is commissioned by Sally to collect mana[6] and sets up his operation in her old laboratory outside of Nairn.[7] Baro has Neige enchant the children of the town and lead them into the caves. When Neige realizes that Marie Adlai is free from the enchantment, he slaps her, for which Baro admonishes him. Baro then checks the children's magic power. He is pleased to see Marie's large amount but displeased to see Marco Scarlet's small amount, so he throws the boy out of the cave. He then begins setting up the equipment to extract the mana out of the children.[3]

After draining several children, Baro decides it is time for Marie, but Gauche Adlai arrives and forces Neige to let Marie go. Baro orders his brother to fight the Black Bull,[8] but Neige is easily outmatched. Baro worries about not collecting enough mana and about Gauche's large magic power. When Asta and Theresa Rapual arrive, Baro laughs at the boy's lack of mana. Asta silences him with a sword swing into his abdomen,[9] sending him crashing into a wall.[10]

When Gauche defeats Neige, Baro ridicules his brother for losing. Asta questions Baro's motives but the man refuses to answer. Asta threatens him by punching next to Baro's head, cracking the wall, and Baro secretly presses a small signal.[11] Theresa reprimands Baro and Neige for harming children, while Baro is biding his time for the Eye of the Midnight Sun to arrive.[12]

Once Sally does arrive, Baro yells at her for taking so long since they have Spatial Magic,[13] and he blames the Knights when Sally complains about the lack of collected mana.[14] Sally fights them until Theresa joins, making it three versus one. Baro offers to help if Sally can heal him and give him money; however, he is actually planning to escape and abandon her. After she double-checks that he is certain, Sally injects him with Special Properties +α. Mud begins flooding from Baro's body, and he transforms into a giant mud monster. Although his mobility returns and his mana is increased, Sally regards him as a failure due to his loss of humanity. Asta and Theresa move to protect the children while Gauche flees with Marie.[15]

During his rampage, Baro almost smashes his brother, and Asta and Theresa struggle to combat the monster and Sally.[16] When Gauche returns, he saves Asta and finds that his own magic is ineffective against the monster. While Gauche is distracted, Baro swats the Knight out of the air.[17] After Asta saves Gauche, the Demon-Dweller Sword glows with Gacuhe's magic, and Asta is able to release a flying Anti Magic slash, which slices through Baro. However, the monster quickly regenerates.[18] Gauche then multiplies Asta, and Baro and Sally are struck by multiple slashes.[19]

Baro's mud form is destroyed and scattered. He attempts to ambush Asta, but Neige freezes Baro.[20] 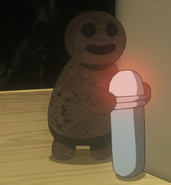 Mud Man
(Anime-only)
Add a photo to this gallery 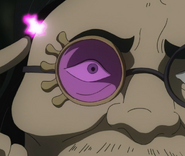 Baro's glasses
Add a photo to this gallery

In the anime, Baro's coat is all that is left of him after he is cut apart by Mirrors Slash.[24]

Retrieved from "https://blackclover.fandom.com/wiki/Baro?oldid=81265"
Community content is available under CC-BY-SA unless otherwise noted.