Start a Wiki
watch 01:32
'Naruto' Profile: Alecdora Sandler
Do you like this video?

Alecdora is a tall man with a lean built with spiky green hair that is slightly brushed back and two strands that hang in the front.

He wears a double-breasted and long-sleeved shirt with a high collar and red trimmings on the edges. The collar also has a chain connecting both ends of the collar as an ornament. The shirt itself is made of two different colors where it is white at the side and red on the middle. The sleeves are mostly in white fabric, except the wrist area where it is red fabric. The shirt extends below his waist and Alecdora also wears a light-colored sash on top of it. Furthermore, Alecdora wears white pants and a pair of high boots. The black boots also have fur around the collar.

Alecdora wears the Golden Dawn's signature squad robe, which covers his torso and is gold in color. The fabric has an intricate design with a similar color palette as the robe. It also has a blue-colored fur around the border of the hood and a pair of blue ropes coming from the left shoulder and connected to the gold-colored button on the right shoulder. The button keeps the robe properly in place. The squad's insignia is positioned on the left side.

While possessed by an elf spirit, tattoos appear on Alecdora' cheeks and temples and his ears become pointed.[4] 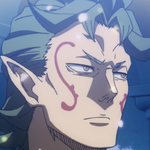 Alecdora possessed by an elf

Alecdora has a prideful elitist mindset referring to Yuno and Asta as slum rats on separate occasions,[5][6] and becoming visibly upset when Yuno is recognized for contributing the most stars to the Golden Dawn.[7] He also scolds Klaus, a fellow nobleman also attending the War Merits Conferment Ceremony, for not being powerful enough.[8]

Alecdora bears an infallible loyalty to Golden Dawn's captain, William Vangeance, bordering on the point of obsession. He has even proclaimed that he would gladly give his life serving William.[9] He becomes extremely jealous when William shows a particular liking for Yuno. This reaches the point where he starts counting the times Vangeance has called Yuno by name per day and getting furious when that number surpasses his own.

As a young boy, Alecdora is shown a painting of a god. Years later, as a member of the Golden Dawn squad, Alecdora is on a mission when he is ambushed and heavily injured. He manages to escape and hides in a cave, where he loses hope of being rescued. However, William Vangeance senses him and appears at the cave's entrance, reminding Alecdora of the painting. Afterwards, Alecdora devotes himself to his captain and squad.[10]

Alecdora talks with William about why he sent Yuno to the dungeon, and William tells him just to trust him. Alecdora listens as William says that Yuno is a member of their squad and that he will get stronger for them.[11]

A week later Alecdora attends the War Merits Conferment Ceremony[12] where he is promoted to 4th Class Senior Magic Knight by Julius Novachrono.[13]

Later Alecdora attends a banquet along with the other Magic Knights, and after the Magic Emperor leaves, he insults Asta for being there. When Leopold Vermillion brings up Yuno, Alecdora says that they have no faith in Yuno and that they alone will bring to fruition their captain's dream. When Klaus Lunettes tries to intervene, Alecdora calls Klaus a disgrace and that Mimosa Vermillion is a disgrace too for being injured during the dungeon exploration.[14]

When Asta starts to defend his friends, Alecdora uses his magic to restrain Asta but is shocked when Asta nullifies the spell.[15] When Asta says that he will be the Magic Emperor, Alecdora along with Nebra Silva and Solid Silva decide to attack Asta. Alecdora notices that Solid's and Nebra's attacks were nullified and restrains Asta in a way that he will not be able to use his sword. Alecdora tells Asta that he will be punished, but watches as Asta uses his second weapon to deflect an attack from Solid.[16]

Before anything else can be done, a soldier comes in and tells them that the kingdom is under attack.[17] When Siren Tium creates a live model of what is happening in the city, Alecdora looks at it and wonders how the attack could have happened without them noticing.[18] When they all split up, Alecdora, Yuno, and Mimosa head to northwestern section of the city to protect the citizens.[19][20] Once at the location Alecdora attacks the horde of corpses with his Sand Magic.[21]

Once he is finished with his part, Alecdora is teleported to another location far from the city along with other members of the Magic Knights.[22] They then combine their efforts, and make it back to the city quickly. When they arrive Alecdora confronts Valtos and reveals how they were able to arrive so fast.[23] Once the Eye of the Midnight Sun members escape, Alecdora says that the Magic Knights cannot call for backup from outside the city, so they must stay on guard.[24]

Later Alecdora reports to the other Magic Knights that they were able to reinforce the magic wall and to restore communications with the other squads. Alecdora then notices a type of mana, when the Magic Emperor suddenly arrives with Asta and an enemy prisoner.[25] Alecdora then listens as Julius informs them about the enemy and what happened. Alecdora then heads back to the Golden Dawn headquarters.[26]

After the Invasion of Kiten, Alecdora is angered when he overhears that Yuno defeated one of the Eight Shining Generals of the Diamond Kingdom and declared to Langris Vaude that he would become captain.[27]

At the Star Awards Festival, Alecdora is displeased when Yuno is given special recognition.[28] He later listens as Augustus Kira Clover XIII announces the Royal Knights Selection Exam.[29]

A week later, Alecdora attends the exam[30] and is placed on Team O with Solid and Dmitri Brint,[31] and their first opponents are Yuno, Noelle Silva, and En Ringard.[32] Before their first match, Solid taunts Noelle but Alecdora calls him back and glares at Yuno.[33]

As their first match begins, Team O combine their magic to fly across the battlefield, planning to end the fight quickly. They dodge Yuno's Crescent Kamaitachi, and when Noelle defends her team with Sea Dragon's Nest, Alecdora tries to crush them with a block of sand that absorbs the water, forcing Team P to split up.[34] Alecdora chases Yuno and Noelle and tries to block their escape with sand, but Noelle crashes through in a small Heavenly Wind Ark. Alecdora tries to stop Solid when he goes chasing after her himself.

Yuno then confronts Alecdora, who is angered by Yuno's arrogance and summons a large sand soldier.[35] Alecdora is further angered when Yuno refuses Sylph's help.[36] After infusing his sand soldier with his greatest offensive and defensive magic, Alecdora attacks Yuno with it, declaring that he, not Yuno, will fulfill William's dreams, but Yuno summons a Towering Tornado from within the soldier, breaking it apart. As Alecdora falls to his knees in defeat, Yuno declares that the only dream he cares about is his own, no one else's.[37]

After Noelle both defeats her brother and destroys the crystal with a single Sea Dragon's Roar, Team O loses the match.[38] Alecdora remains on his knees as he struggles with his loss.[39]

Several days later, Alecdora is possessed by an elf spirit and gathers with a group of possessed Golden Dawns.[40] Later that night, all the remaining elves are exorcised after William and Licht combine their magic to connect the elves to a giant tree through which Asta sends Anti Magic.[41]

Six months later, Zenon and two Dark Disciples attack the Golden Dawn base. When Zenon confronts William, Alecdora steps in to defend the captain. Zenon easily defeats Alecdora and his Sand-Armored Dreadnought Guard, and William is forced to save his subordinate.[42] 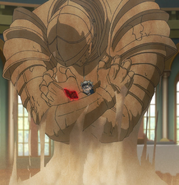 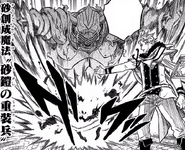 Retrieved from "https://blackclover.fandom.com/wiki/Alecdora_Sandler?oldid=61353"
Community content is available under CC-BY-SA unless otherwise noted.