Ado 「アド」 is an elf and is reincarnated into the body of Cob Portaport.[1]

Ado is shown to hate humans.

Five centuries later, Patolli sets the last magic stone in the sephirot, and Ado possesses Cob Portaport. Once the remaining Royal Knights are expelled from the floating dungeon, Ado transports the other revived elves in the dungeon into the central room. The possessed Siren Tium then steers the dungeon toward the Clover Kingdom and their revived brethren.[1]

Rhya sends Ado to fetch Yuno and his magic stone, but Ado is instead defeated.[6] Later that night, all the remaining elves are exorcised after William Vangeance and Licht combine their magic to connect the elves to a giant tree through which Asta sends Anti Magic.[7] 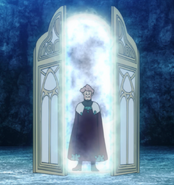