Abari is a bald headed man with blank eyes. A tattoo encircles the crown of his head.

Abari is shown to be ruthless in battle.

Abari infiltrates the Seabed Temple with Vetto and other members of the Eye of the Midnight Sun.[3] The mages spread out,[4] and Abari uses Different Dimension Sphere to trap Yami Sukehiro and Gifso.[5] Yami develops a new spell that can cut through Spatial Magic and, after escaping, beats up Abari.[6]

After the Eye of the Midnight Sun members are defeated, Charmy Pappitson binds Abari and the other captives in cotton[7] and carries them to the Magic Knights Headquarters, where they are interrogated.[8]

Months later, after Patolli places the last magic stone in the sephirot, the Eye of the Midnight Sun members are all sacrificed. Their bodies burn up as their mana and souls are extracted.[9] 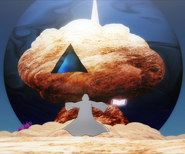 Different Dimension Sphere
Add a photo to this gallery

Retrieved from "https://blackclover.fandom.com/wiki/Abari?oldid=81489"
Community content is available under CC-BY-SA unless otherwise noted.